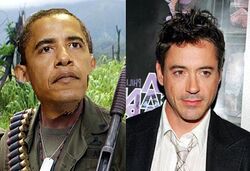 Barack Obama is actually a character of Robert Downey Jr.

Washington, DC. In a surprise announcement, Barack Obama has announced that he is in fact Hollywood actor Robert Downey Junior. The accomplished actor stated that he started campaigning as Obama as a joke but accidentally got caught up in things.

As a firm supporter of John McCain, Barack "Robert Downey Junior" Obama expressed delight at the nomination of his character as the Democratic presidential candidate. He is quoted as saying "Well now it's a one horse race, to be honest.. any people who would vote for a loud mouthed democrat like Obama deserve to lose."

However, as reports that Obama/Downey Jr. is actually white emerge, his support has increased significantly. Experts believe that he may even comfortably claim second place, several percentage points ahead of Ralph Nader.