Basra, Iraq British forces in Iraq have been accused of using a new secret weapon in the fight against global terrorism; evil, man eating badgers have been deployed in the latest offensive in a bid to drive out insurgent forces. 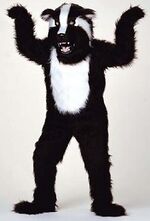 Look out, it's deer - swift

Major Mike Badgerer spoke to UnNews, "We can categorically state that we have not released man-eating badgers into the area.", he said from his armoured anti-badger mobile, "We have been told these are indigenous nocturnal carnivores that don't attack humans unless cornered."

Despite the official denials of the british forces, local residents tell another story. One housewife, Suad Badger, 30, claimed she had been attacked by one of the badgers as she slept.

"My husband hurried to shoot it but it was as swift as a deer," she said. "It is the size of a dog but his head is like a monkey,".

The director of Basra's veterinary hospital, Mushtaq Abdul-Badger, has inspected several of the animals' corpses.

He told the UnNews: "These appeared before the fall of the regime in 1986. They are known locally as Al-Girta. Talk that this animal was brought by the British forces is incorrect and unscientific."

Proof if proof be need be.

However an investigation by UnNews has revealed this shocking memo sent to army head quarters in England by Major Mike Badgerer himself, clearly requesting the foul beasts for military use.