Today Baby Billy has a haunted look in his eyes, which developed without light or human affection.(time-lapse infrared photo courtesy of Time-Life books, a Disney subsidiary of Exxon/ADM/WalMart Inc.)

COVINGTON, West Virginia - Baby Billy, a worldwide sensation when he was trapped in a well on a rural farm in West Virginia for three weeks in 1988 - and who never got out when the world lost interest - has turned 25. Nostalgia fans, history buffs, and for some reason coin collectors have driven up interest in the plight of this twenty-something, and the world is starting to pay attention again.

"We have to rescue Baby Billy!" Remember that heartrendering plea? It was Billy's mother, Janet, standing by the open well, one arm raised in the air and giving it all she had. Now she's back at it, and in fact has never stopped.

"My son has grown up inside a well!" said Janet, 47, standing by the deep hole in what is now an urban industrial park. "What is wrong with you people? This has gone on long enough, and it's only been my husband Hugh and I, and my cousin Stanley and his wife, Gem, who have seen to it that things are still lowered down to Billy every few days."

"Socks, food, buckets for butt poop, we send it all down on a pulley system that they set-up in '88," Janet complained, pointing to a rusty wheel and some ropes. "I come here most of the time, and often live in that hut over there that Hugh, bless his heart, put up in '94. And Baby Billy can hear me yelling down to him, so I'm pretty sure that he knows that someone cares. I dunno, there've been times I've wanted to give it up and take that trip to Vegas we've been planning. But then what kind of mother would I be?"

Every few months Janet lets Hugh travel over to Ohio to see his folks for a few days. While Hugh is gone Janet sings to her child, something she is too self-conscious to do when anyone is around. She sings songs about high hopes, ballads about where the flowers have all gone, and operas about national tragedies and individual redemption. Her clear voice carries a little, so the people in the industrial park usually close their windows. A recording contract is out of the question, she claims. She just wants her boy back. 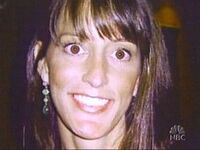 "That's right," said Gem, who has no excuse for the haunted look in her eyes.

Back in 1988 'Baby Billy Down the Well in West Virginia' was the cause celebre, and TV and the print media were saturated with Baby Billy's plight. There was wall-to-wall coverage week after week after week, for three of them. Then the U.S. presidential race really heated up, with Dukakis accusing old man Bush of raping those monkeys, and suddenly the lights and cameras were gone. The men with shovels and back-hoes were quickly hired away by the mining companies, the town pissed away its sympathy money, and the police and governmental people figured they had more pressing matters to attend to. Suddenly, Baby Billy had to fend for himself.

From that time on it's mainly been Janet and Hugh at the well, with Gem coming by a bit more lately.

Now, with Baby Billy's 25th birthday again drawing the world's attention to the West Virginia youngster's desperate plight, there is again excitement in Covington. They believe that rescue is finally on the way, just around the corner, or at least gaining on the rail. And, yes, this just in, officials in-the-know have assured Baby Billy's family that they are getting their priorities straight, and that Baby Billy should be free as a bird and living among earth-dwellers by mid-2018, or 2022 at the latest.

Back at the well, Janet, dressed in her once famous but now shopworn Caesar's Palace tee-shirt, kicked a few pebbles down the hole to show the assembled reporter just how deep it still is. "Ow!" could be heard faintly from deep below, like an echo of a time gone by.