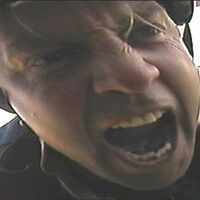 A typical Australian during a particularly violent fart, yesterday.

A STUDY OF THE WORLDS arse emissions has shown the extent to which developed countries produce more noxious fart gas per arse than emerging economies. Australians were found to be the world's worst polluters per capita, producing five times as much methane from farts as Tom Cruise.

The US came second with eight tonnes of the methane gas per arse - 16 times more than that produced by Sean Connery. The US also produced the most noxious flatulance in total, followed by China. The Flatulance Arse Tracking for Action (FARTA) website is the first global inventory of digestive tract emissions and looks at more than 30,000,000 arses.

Kevin Phumph, a research assistant at the Center for Global Fart Development, hoped the online inventory would help the push towards a lessening of farts throughout the world, "if we can educate people to, perhaps, bottle up their farts or eat less curry then that has to be a good thing, doesn't it?" he told Unnews.