UnNews:Asylum seekers now try to break out of Britain 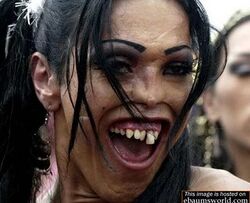 "For you sir, sixty pound!"

INCREASING NUMBERS OF ASYLUM SEEKERS are sneaking out of Britain because they are fed up with the state of our home grown prostitutes. According to immigration staff illegal immigrants are complaining that most British (and especially Scottish) prostitutes are ugly, have rotten teeth and poor personal hygiene.

Les Bea-Anne, a chief immigration officer for the UK Border Agency, said that of those caught trying to flee the UK, most have said that the lack of decent whores and their "fetid smell" were the main reasons why they wanted to get out of the country.

Mr Willywormer, a Kent-based chief immigration officer for the UK Border Agency, said "One thing we have noticed recently from these people is a distinct dissatisfaction in the quality of our sex workers. I mean, does it take much effort to have a quick wash down below between jobs?"

He told Unnews: "They are also fed up with the relatively high cost demanded by hookers for relatively standard services."

"On Afghan gentleman complained that he was charged £55 for a hand job! This is more than double what a typical whore in, say Belgium would charge."

Another immigration insider said he had stopped a group of four Iraqis trying to sneak out of the port of Dover. He said: "A group of four men from Iraq I stopped recently complained that they couldn't get the women to give out freebies. It's all a bit rich really."