UnNews:Apple to introduce the Burberry Mac 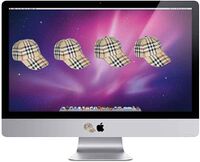 Aiming to bring retail flair to a fading line of computers, the Burberry Mac is intended to grab customers with its distinctive look. Computers with the new "Burberry look" are expected to be edgy, in-your-face machines. Buyers will be offered a free scarf to wrap around their computer to keep it warm at night, and to keep all eyes on it in the discothèque. The "suspend" function will be renamed "chill," while the power switch will bear the legend, "Check it out."

"The Burberry Mac will pack style, attitude, and a price that will target all consumers with flawless credit records," said Ahrendts. "The B-Mac will simply fly off the shelves." The first Burberry Apple, code-named "Fruit Cocktail," is due in stores in January 2014, as the United States suffers a "B-Mac Attack."®