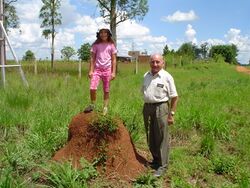 LAS CRUCES, N.M. -- Four ants were confirmed dead and eight remain missing in Thursday's collapse of an anthill northwest of Las Cruces, New Mexico, according to news reports. The victims, who were worker ants assigned to a nearby herd of aphids, were emerging from the topmost chambers of the nest, witnesses said. The collapse, triggered by a falling branch, sent about 30 grams of red clay through the northwest tunnels of the ant community, destroying the primary access route.

Queen Ndeet Zymq expressed regret at the number of ant tunnels that have recently collapsed in her nest. She said a committee of experts would be put together to examine the causes of the accidents and recommend measures to enable authorities to take appropriate action to prevent future occurrences.

The ant colony is asking for donations of sugar and honeydew to assist with relief efforts. These may be dropped off beside any tree behind the Knox Truck Stop at Las Cruces Sunday. Brown sugar cannot be accepted, however, due to its resemblance to Amdro ant bait.