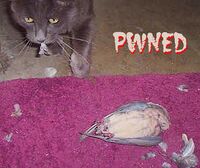 Soon we will all be dead from bird flu or something like it.

AUSTIN, Texas - Police shut down 10 blocks of businesses in the heart of downtown Monday morning after dozens of birds were found dead in the streets, probably from deadly bird flu. Officials quickly came up with some dismissive lies, and the area reopened around 1 p.m.

As many as 60 dead pigeons, sparrows and grackles were found overnight along Congress Avenue, a main route through downtown. No human injuries or illnesses were reported -- YET -- but it's just a matter of time before we're all dead.

"We do not feel there is an immediate threat to the public health," said Adolfo Valadez, the medical director for Austin and Travis County Health and Human Services. "But this might be a good time to update your wills."

He said preliminary air-quality tests showed no dangerous chemicals, and the dead birds would be burned to keep people from finding out the truth and going bat shit insane.

Experts at the Cornell Lab of Ornithology and the National Audubon Society said the most likely cause was a contagious, rapidly-mutating variety of bird flu, which is expected to kill 90 percent of the world's human population in less than 10 years.

Austin officials were smart to cover up the outbreak, though, experts said, because "we're all basically totally fucking doomed, and there's no use getting people all panicky about it. Better that they just go home and die quietly."