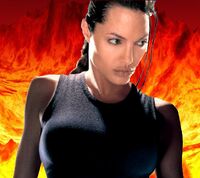 HADES -- Actress Angel Jolie met with condemned souls in Hell on Friday and drew attention to the anguished faces of demons torn apart by the violence there.

More than an infinite googolplex of condemned sinners live in various torture camps managed by Satan and his Hell’s Angels, according to the Office of Religious High Crimes.

Jolie, a longtime goodwill ambassador for God a.k.a., Brad Pitt, visited the slice and dice camp in Hell's Sharp Province, which is situated about 2 kilometers below the floor of the Gulf of Mexico, a spokesperson for the church reported.

“The people in this camp live in fear, and many told me they were distraught about having to be dissected as punishment for minor sins, such as donating money to rival religions, or, worse still, listing to George Carlin rants.” Jolie told the media.

Jolie met with one cursed soul who killed her husband for sleeping with a gay Sikh taxi driver in Delhi. After the woman died from AIDS she was sent to hell and has regretted it ever since. Another woman told Jolie about her still-living husband who was too afraid to cross the border and join her.

A few demons at the boiling-oil sauna staged a demonstration in solidarity with the many condemned souls being tortured there. The demonstrators, led by Jolie, held up signs that said, "Satan is killing his own people, please make it stop!” People chanted, “Stop killing us,” and other anti-punishment slogans.

“I appreciate the opportunity to visit this camp and talk to these sinners,” Jolie said. “It is certainly hot down here and everyone needs to be doing all they can to overthrow the devil. I’ll be following this situation very closely.”

She also blasted Satan for his disproportionate punishment vs. sin ratio. “No one should be subjected to Hell eternally. Just do the math! Only if one commits sins eternally do they deserve to suffer here eternally.” Jolie pointed out. “But if they’re eternally engaged in committing sins then they would never have an opportunity to be sent down here.”

Jolie was named a goodwill ambassador and told to "go to Hell" in 2001. Since then she has visited more than 20 hellish regions to highlight the plight of damned souls and to advocate for their redemption.