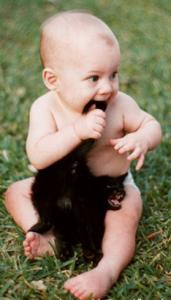 THIS is Hammal Assul, the perverted terrorist our boys Patriotically annihalated in the name of Democracy. Notice the vicious pet panther.

GULF OF HORMEL, Iranian Coast -- A cargo ship hired by the United States Military fired several warning shots at an Iranian boat after the occupent sneezed in "An excessively loud and intimidating manner."

According to a reliable U.S. source, the American cargo ship was traveling through international waters when two unmarked ships approached it. "One of them was a small rowboat with a very intimidating bedsheet for a sail," says a crewman of the American ship, "And the other was even smaller--about four inches. I remember thinking, 'Gee, those Iranian soldiers must be REALLY small in order to fit into a ship that size!"

As it turns out, the boats were a toy sailboat piloted by four year old Hammal Assul, and the smaller boat was a battery operated remote control ship given to him for his birthday. "We were going to give him a gun so he could practice killing Jews, but decided to wait till his fifth," said his parents adoringly. 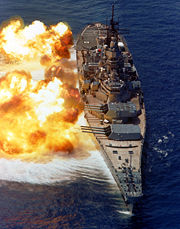 But the crewmen of the American ship were unaware that the boat in question was, in fact, a toy. "I said to the captain, 'that looks like a little kid in that boat!' and he said, 'It's just a disguise! It's really a fat Arab terrorist bastard squeezed into a very small costume!'"

The American ship beamed a Morse Code signal to the child's toy, and when it didn't respond, the troops were ordered to fire off a flare to intimidate him. It was at this point that Hammal let out a "Very loud...or at least marginally loud" sneeze that left many of the soldiers "wondering what on earth that tiny little sound was." It was at this point that they were ordered to fire warning shots at the Iranian sailboat.

Soldiers fired "A few bursts" of light machine gun fire at the small boats, along with "several flares" and "Possibly a grenade or seven." "The kid got out alright though," says the commander of the boat, Butch Henson, "That is...at least...his head did. And a few of his toes."

Tensions between the United States and Iran have been increasing exponentially over the last year or so as President Bush refused to speak with Iran's president, look at a picture of him, or acknowledge his existence in any way other than to spit at him; meanwhile Iran's president continues to make radical claims that the Holocaust, World War II, and Hitler never existed, they were merely fabrications of vicious Jews with computer animation systems about 90 years ahead of their time.

Other tensions have arisen between the United States and Syria as the American government has begun drawing links between Syria and nuclear weapons programs. "It's very simple," says a White House spokesman, "A janitor at the capital building of Syria went on the internet, where he watched a porn video featuring a Colombian woman (incidentally, the hottest of the Latinas!). This Brazilian woman once vacationed in Japan with a tollbooth operator with the same hairstyle as a popular north korean pop artist, whose brother once rode the same bus as a Korean nuclear weapons developer (not at the same time, of course). So clearly, Syria is aggressively pursuing a threatening nuclear weapons program."

Whether these tensions will be diffused by peace talks or will explode in a violent global conflict is not yet known. But until we know, you might want to sneeze quietly.