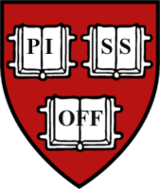 The modernized Shield of Harvard University

CAMBRIDGE, Mass. -- In a startling press release from Harvard alumnus Michael Winerip, who shall remain anonymous, it was revealed to the general public that Harvard University hates everybody. They don't like you or your overachieving kids, and they pretty much wish all of you would drop dead.

This news has startled the three dozen people left in the United States who didn't already guess as much. Said Vladimir Lenin, speaking from his cryogenic life preservation chamber in Moscow:

However, not everyone believes this is a bad thing. In fact, the Application Reviewing System of Excellence (ARSE), Harvard's main application letter-shredding facility, claimed that making this information public would improve their lives significantly. "We've been spending every few months locked in basements, with two chutes being our only access to the outside world: one for food to come down twice a day, and the other for hundreds upon hundreds of those goddamn applications to come down on our heads. We're supposed to read them and pick the most qualified, but these days we're just tossing them into the furnace. It reduces our dependence on foreign oil." Indeed; Harvard has reduced oil consumption by 62% since they started using student applications as fuel.

Harvard's current acting president, Derek Box, said during an exclusive interview in his private sauna that "Harvard University is as dedicated to providing higher education as it was when it was first founded, but really, all these new freshmen coming in every stinking year grates on the nerves. We're considering not accepting anybody at all for the next few years, so we can enjoy all this tuition money in peace. We're not alone, either; Princeton and Yale may follow suit." He then passed out and had to be revived by waving a fifty thousand-dollar tuition check underneath his nose.

In addition to a change in the coat of arms, Harvard is considering spreading the rumor that they are more likely to accept students who are facially disfigured, just to see if the hordes of naive high school seniors will try to ingratiate themselves on that basis as well. "It's really kind of funny, the things they will believe" commented one Harvard faculty member. "We told 'em a few years back that taking Advanced Placement courses would improve their chances. Ha ha! We've thrown out every single application that mentioned AP courses for the past three years."

Plans to build an Ivory Tower on campus grounds have not yet been confirmed.