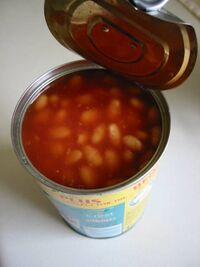 Beans, pictured here, were the subject of Shermett's poem.

KENTWOOD, Louisiana -- Alleged killer Mason Shermett, 53, broke his long media silence today to explain why he murdered his wife of twenty-two years: she had ruined both his life and his poem about beans.

"That Devil woman was always tryin' to take everything away from me," said Shermett, "and I thought to myself, Mason, you ain't gonna let this woman ruin your bean poem, no sir."

Shermett's poem about beans was a four-line quatrain consisting of two rhymed couplets. Interestingly, most Americans are already familiar with the poem, but Shermett insists that it was an original composition he had been working on for several months.

"I was sitting down at the table, saying the first line over and over. Beans, beans, the musical fruit. The more you eat... but that's where I was stuck. And then that devil woman comes in and suggests 'the more you fart?' Well, that don't even rhyme!"

Asked if, in retrospect, he feels that it was an overreaction to beat her to death with an oversized novelty pepper shaker, Shermett replies, "Naw."

When asked if he was aware that his bean poem was a pre-existing composition, Shermett spat on his own feet. This journalist isn't sure why he did that. I'm sure it was more unpleasant for him than it was for me.

A bean is the seed of a plant from the family Fabaceae.