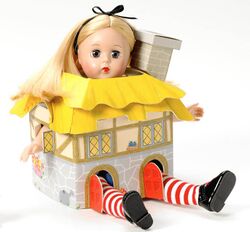 Alice wonders that the fuss is all about

What are doing out here? Go inside Alice and fetch me a compromise.

Alice was so surprised to be addressed by a rabbit that she ran into the Capitol building. Inside were a menagerie of animals fighting and arguing with each other. When they saw Alice all felt momentarily silent before starting again but this time with higher and angrier voices.

One group who had protruding teeth and brayed offered Alice a banquet of food to pick from . They urged her to EAT! EAT!! and not to worry as she could always go on a run afterwards. In a different corner, a herd of elephants in the corner were trying to drink piping hot tea through their trunks and were suffering the consequences. They trumpeted like mad with the pain and tried to beckon Alice over to them shouting 'DRINK! DRINK!!' but Alice couldn't make out what else they were saying.

Look, said Alice in that voice she always used when talking to irresponsible adults, I will EAT and DRINK and see what happens. The donkeys and elephants and other creatures who fitted neither category looked in horror at her decision and stampeded out of the building. Very curious.. said Alice as she saw them leave and helped herself to a cup of tea and cake. 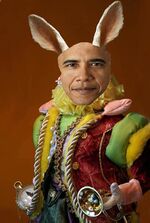 White House Rabbit: I know this happened on my watch. Er..what time is it?

Alice felt her body start growing at an alarming rate. She tried to squeeze her arms and legs into the corridors and chambers of the building but she kept on growing. Then her head hit the ceiling. Outside with her huge enlarged ears she could hear many voices, including the White House Rabbit.

Oh..I wasn't expecting that.. said the White House Rabbit but was then drowned out by elephants trampling the other animals outside in fear. We need to send someone down the chimney, said another voice Alice didn't recognise.

Alice could hear a lot of noise and then the sound of many voices shouting send for Ben the Lizard, he is over at the Federal Reserve Warren. Send for Ben! He also believes in Fairy Tales, he's got his own.

Fearing that her neck was about the break, Alice moved her leg up the chimney. Then she heard the sound of something scrabbling down and heading towards her foot. 'That must be Ben' she said to herself and when Alice felt his darting tongue touch her shoe - she recoiled her foot and kicked him in the head.

There goes Ben she heard as the animals outside watched the Federal Reserve lizard fly through the sky and there goes the national debt.. others added until a sound like breaking wind produced a gale of laughter. Alice felt so annoyed that with one final heave, she pushed the ceiling and roof clean off. Now she could breathe clearly at last...