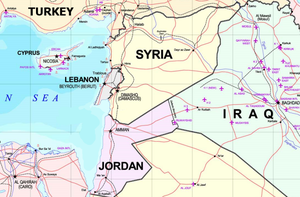 The BMI map, showing all destinations in the region that the airline flies to, has understandably got some people worked up.

BRITAIN and ISRAEL -- British airline BMI has achieved what the majority of Arab states have sought to do for years in wiping the Jewish state of Israel off the map.

Israeli passengers complained to the company after they noticed that the onboard map on the aircraft did not show their nation and claimed that all flights headed for Israel were going to Mecca in Saudi Arabia. Naturally, some of them were a little concerned by this.

Meanwhile, the Israeli government are furious. "We shall be contacting BMI in London," says Gideon Sitterman of Israel's Transport Ministry. "It is not acceptable that they are willing to do business in our country yet wish to hide our existence." Meanwhile, BMI spokesperson Mahmoud Ahmadinejad claimed that the incident did not have any darker political meaning. "We would like to apologise to passengers on the flight and state that we will continue our regular flights to Israel, inshallah."