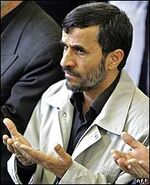 President Ahmadinejad casts a withering glance at a liberal Imam during weekly Prayers for the destruction of Israel.

TEHRAN, Iran -- Iranian president Mahmoud Ahmadinejad presented the findings of the Holocaust Conference today in a televised address, "After extensive research, our panel of experts has concluded that the so-called Holocaust was actually just a super big homosexual party for Jews."

"First, all the Jews went on a special fun train ride to big party camps custom built just for them. I ask you, who doesn't like trains? Or camping? Or parties? Next, they divided up, the boys in one direction and girls in the other. It makes sense, doesn't it? The Jews separate by the sexes to pray, so it makes sense that they would also like to camp this way. They are very slippery people, the Jews. It would be just like them to think this way."

"Next, they took off all their clothes and took long showers with one another. We have photographic proof of this! Dozens of Jew men, showering only with other men! They put on cheerful multi-colored costumes and lived in snug little cabins for many, many months, while kindly expert German doctors attended to their every medical need like sore knees and syphilis, I assume. The girls were luckier and were at least allowed to live within the sight of God by having heterosexual interactions with their benevolent German caretakers."

When pressed on why the Jews who survived were found starving and gaunt Ahmadinejad responded: "It's not that they were hungry, it's that many of them had an early form of AIDZ, or 'Acquired Immune Deficiency for Zionists.' Heh-heh. Yeah. That's a good one."

The conference, and Ahmadinejad in particular, have been roundly condemned by absolutely everyone, everywhere.

In Vienna for a peace conference, Pope Benedict had harsh words for the Iranian President, "This guy's the biggest fucking asshole I've ever heard of. And I've met Bush."