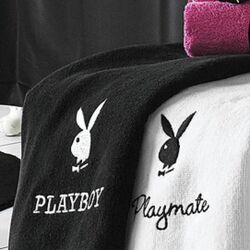 For swingers Mel and Joey Schwanke, His-and-Hers towels are just the beginning.

Then, Joey had a brainstorm that changed everything and revitalized their marriage.

“Her idea reignited our passion,” her husband agreed.

What was her big idea?

Over the years, he has acquired a wardrobe that does not rival Joey's, but matches it, item for item.

“We even wear matching bras and panties,” Mel confided. “And you should just see our lingerie collection! Va-va-va-voom!”

Joey agreed that her hubby “looks beautiful in pink lace, a chiffon negligee, or a peek-a-boo bra.”

The couple boasts wardrobes of 146 custom-made, matching outfits. “The only thing that's different,” Joey said, “is the size: I wear a two, and Mel's a fourteen.”

“Now that I'm a transvestite, sex between Joey and me is better than ever,” Mel was quick to point out. “Still, a little sadomasochism doesn't hurt—or, sometimes it does, but in a good way.”

In addition to their adoption of a safe word to indicate when “stuff gets a little too rough,” the couple has worked out the dominant, or top, and the submissive, or bottom, positions so “there's no confusion,” Joey said. “Mel is the boss from 8:00 AM to 5:00 PM, and I'm the boss from 5:00 to 8:00 in the morning.”

“Make sure you buy one for me, too,” Joey said.

“We buy the same instruments, just as we do the same clothes,” Mel explained. “No worries, honey bunch,” he told his wife. “The sex shop is having a two-fer sale all next week.”