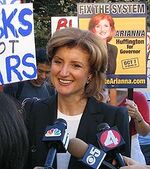 The deal marks yet another new phase in the lives of both signatories. Content to be specified later.

It is a bold bet on the future of on-line media by a company losing readers faster than the New York Times--and that fans of Arianna Huffington and her anti-corporate essays will continue to read them by force of habit after they start to reflect the view of a corporate Board of Directors.

The deal, signed at Super Bowl XLV, puts Ms. Huffington in charge of everything from news sites to Mapquest. Technology guru Rob Enderle said, "The cash is just the signing bonus for Huffington--she could wind up running the place."

AOL at one point was an Internet giant, convincing 28 million people to let its ponderous software take over their computers. They took their phones off the hook while they surfed the Web, because the only reason they'd use the phone is to call AOL to cancel the service, and no one ever answered. Around 2005, the company changed its focus to being an Internet destination and has been grappling ever since over the question of why one would ever visit it.

Ms. Huffington has changed her own focus repeatedly, from an outspoken conservative in the mid-1990s to an outspoken liberal today, as her divorce decree with Congressman Michael Huffington gave him custody of his ideology, to which Ms. Huffington doesn't even have visitation rights.

Ms. Huffington expressed confidence in the merger in the usual way--by writing a blog--which breezed through AOL's Public Relations bureaucracy, mostly because it focuses on what appetizers were served at the various business meetings. "We'll be creating a company with enormous impact, dahlink," she blogged, a prediction eerily similar to the one AOL gave investors the last time it reinvented itself.

UnNews Executive Editor Morris Greeley called it "a red-letter day for on-line media--a ray of hope for other outlets that have all the ingredients for success except compelling content."