TRENTON, New Jersey - 37 year old Ivana Weymore, a single mother of one had been stuck in the dumpster behind the local Kentucky Fried Chicken for 3 weeks. Police attempted for several hours to remove her, but she was wedged in so tight that rescuers had to transport her to a nearby scrapyard where the dumpster was cut from around her. Paramedic Steve Davis had this to say, “Man, she was stuck, we tried everything we could think of, oiled her up and pulled, had her hold onto a chain from a tow truck, we even tried to inflate an airbag under her to force her out, but no go. She was like ten pounds of sh*t in a five pound bag.” 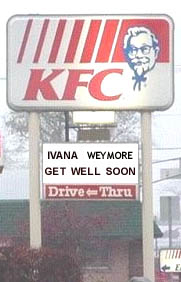 Ms. Weymore explained how the situation came about, “I had stopped to pick up a 20 piece bucket to munch on the way home. I was waiting in line at the drive-thru and got light headed, I tend to feel weak if I don’t eat frequently, so I grabbed for a donut, but both boxes were empty, which was strange because I had only just picked them up before my interview at Disability. I started to panic, but then smelled chicken when a young man walked by. I saw him throw a whole plastic tray of chicken into the dumpster. Apparently if it sits too long it gets tossed out, can you imagine? I managed to walk over but the chicken was too far down to reach. I found a plastic bucket and used it to stand on and just as I got my fingers on a wing, the bucket flew out and into the dumpster I went. I landed on my back but I couldn’t budge, I tried to yell but the noise from the traffic was so loud, I guess no one could hear me. I just laid there stuck, but God must have been looking out for me because every couple hours food would get thrown in, so I didn’t starve. However, I did get scared something awful the first time the garbage truck lifted me up and flipped me over."

Shawn Rakar, a KFC employee, told reporters how he discovered Ms. Weymore, "Me and Willie was sweeping up the trash in the parking lot and I went to empty the dustpan in the dumpster but it fell in. I jumped up and leaned over to get it and that's when I saw her. I hopped back down and yelled for Willie to get Mr. Johnson and tell him there's some big fat white bitch in the dumpster!"

Police said no charges are pending against the KFC. The store manager, Daryl Johnson released this statement: “KFC regrets this terrible incident. Ms. Weymore has been a long time and highly valued customer. We hope this hasn’t ruined her taste for our product, either Original or Extra Crispy”

When her 15-year-old daughter, Darlene, was contacted and asked why she hadn’t reported her mother missing, she responded, “Mama's missing? I didn’t even realize. She stays in her room most times; I just slide her food through the slot from the kitchen to her bedside table. I don't never go in if I don't have to, the stink in there is something horrible!”

Ms. Weymore is recovering in Trenton General Hospital, were Doctors report her condition as normal for such an obese woman. Hospital spokesperson Allison Parker stated, “Ms, Weymore is resting comfortably and demanding seconds at every meal.”