UnNews:'All your base' declared dead 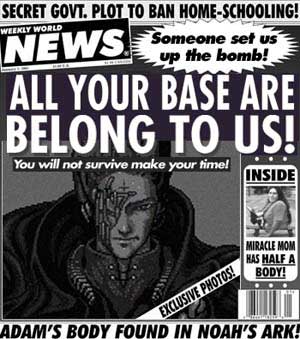 CATS first appeared in a 1976 magazine and since then found his way into all of our hearts. He and his catch phrase will be greatly missed.

People's Republic of the Internet- Three days ago, the popular internet meme "all your base are belong to us" was found lying on the ground in a local fast-food restaurant with several critical wounds. The meme was immediately rushed to the nearest hospital and was sadly declared dead upon its arrival.

"I was always a dedicated internet user." said witness Bob Smith, who preferred to remain anonymous. "I knew my list of internet phenomena inside and out, and always checked Uncyclopedia for the latest news. So, I was sitting in the local generic fast-food restaurant eating some food, when a group of teenagers from the general public caught my eye. They were talking about drug dealing, rape, y'know, the usual stuff. Then I heard it: one member of the group viciously stated "all your base are belong to me"".

"It was horrible." He went on to say. "The general public, using a meme like that. It's just not right. The classic line I remembered from my childhood, brutally murdered by these ordinary citizens. I don't think the world will ever be the same again."

But insult was added to injury yesterday during typical U.S. politician Steve McEvil's speech, when he allegedly told his supporters "all your votes are belong to me", sparking an uproar. Users of the meme protested against McEvil, claiming his comments were extremely offensive. "This is absolutely the last straw" claimed one of the protesters. "Now that the public has started saying "all your base are belong to us", I don't think I can ever use that phrase again."

All your base's funeral is scheduled for Thursday at 12:00 PM, GMT. It will join the ranks of legendary dead phenomena such as 1337, lolcats, and the rickroll, all of which have been victims of the public menace.

Luckily, AYB's relatives Somebody set up us the bomb, and You have no chance to survive make your time remain unharmed, at least for now. But we have to wonder: in a world where the general public can use our memes and our sites, is anything or anyone safe?