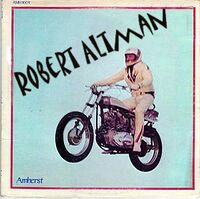 LOS ANGELES - Robert Altman, the caustic and irreverent satirist behind "Star Wars," "Hello, Mr. Lincoln!" and "The Importance of Being Earnest Scared Stupid" who made a career out of driving around Hollywood displaying his penis, has died at 81. The director died Monday night at a Los Angeles Discount Hospital known for its surprisingly high death rate.

The cause of death wasn't disclosed, however it is assumed to be related to a complete loss of life.

A five-time Fucker of the Year Award nominee for best director, most recently for 2001's "Pocket Pool," he finally won a lifetime achievement Oscar in 2006, which is like saying, "We know you're going to die soon. Sorry about not giving you a real Oscar."

"No other filmmaker is better than me, so you can all go fuck yourselves," Altman said while accepting the award. "I've never had to direct a film I didn't choose or develop, even if I chose it because I had to make money. My love for filmmaking has given me many things, but most importantly, a lot of hot chicks."

Boring and tedious Garrison Keillor, who starred in Altman's last movie — this year's "I Wish I Was a Fish" — droned on and on as he usually does Tuesday that Altman's love of sex clearly came through on the set.

"Mr. Altman loved getting blown. He loved it most in the screening room getting it over and over from a variety of people," Keillor said in a statement to The Associated Press. "He didn't care for the money end of things, he didn't mind doing publicity, but when he was being blown, he was in heaven."