This article is part of a series of interviews with the dead, using our patent-pending UnCanninator. The Cabal is planning to infiltrate society with UnCanninator Tech and compete directly with psychics like John Edward and with Scientology, on another front altogether. Profit projections are through the ceiling!

CAUTION Do not stare directly into this audio, nor should you expose yourself to it for more than 10 minutes at a go. This is some dangerous super-secrety-sciency stuff, so be careful and don't feed it to children unless child has a USB port.

If you don't believe any of this, you can bugger off! 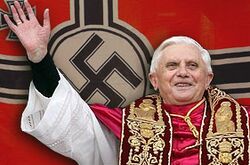 ROME, Italy - Emperor Palpatine, former Pope of Rome, has caused outrage around the world as, during a television discussion over interfaith discussion, he opined, "I think democracy is fantastic. I implore my subjects to take an active interest in it, too. It's a positive option ... We've heard so much about what is not allowed that now it's time to say: we have a positive idea to offer ... I don’t know what it is, but is definitely very nice. I really want to see lots of democracy all over the world. Nothing fills me more with pride than to see lots of democracy when I take long trips, when the moon is full."

These comments have naturally caused quite a stir with the clergy, as their one-time darling, now awakened from a coma in a mental hospital, was enthusiastically defending the indefensible. Democrats everywhere, however, were delighted that no less than the ex-religious leader of some wackjob cult a community of faith was taking up their cause.

Nelson Mandela, someone sent to prison because he loved democracy so much, told the media "I'm glad finally someone else has spoken out in favour of democracy, even if they obviously don't have any political clout."

World expert Julius Caesar, speaking from beyond the grave, told reporters, "I hope the world is sufficiently prepared before Palpatine and his cadre of loyalists, as we world wanderers would say, democratize the world. It could get quite painful if we get freed by something so beautiful, it could even end up severely happy."

However, for a country that is, according to official government statistics, "addicted like a fucking addict" to crude faith, democracy could provide some light relief for the Church through the crisis of faith that has dogged it since they had all that stuff with old guys in large phallic crowns and torturing people whose faith was ravaged after they died.