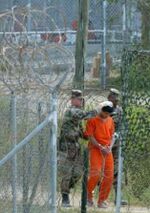 Inmate Ahmed "The Car-bomber" Al-Hasimi enters the ring, accompanied by his trainer and bodyguard.

Guantanamo Bay, Cuba Friday night's much-hyped boxing match up between inmates and guards at the Guantanamo Bay detention facility was an enormous success according to all involved. Promoter Don King, who coined the term "Fray at Gitmo Bay" for the event, said he is even more proud of it than he was of organizing the "Rumble in the Jungle" and "Thrilla in Manila" back in the 70s.

The boxing match, sponsored by the Nevada Gaming Commission in cooperation with the World Wrestling Federation, was originally planned via United Nations resolution 173-D last month. The UN initially called for the closing of the Gitmo Bay prison, but under American pressure conceded to sponsoring the boxing match instead. "Since most of the matches would be carried out in a 'fight to the death' format," explained Secretary General Kofi Annan, "there was a likelihood that many prisoners would die and the prison could eventually be closed anyway."

Everyone agreed the venue was ideal, as being outside the United States it is a legal [[black hole]], with neither the Geneva Convention nor international boxing rules being applicable. President Bush was pleased that the boxing inmates couldn't be "saved by the bell," saying that "These vile terrorists shouldn't be given the same rights as regular, law-abiding boxers. Therefore, it's perfectly ok to keep walloping on them even in between rounds."

Right before the fight started, bookmakers were giving 100 to 1 odds on the inmates, knowing that the[guards were far-better equipped. The suspected terrorists had to resort to improvised weapons, including light fixtures and chair legs. A celebrity panel of judges scored the competition; the panel included a US military tribunal, former heavyweight champion Mike Tyson, and Simon Cowell from American Idol.

The only controversy involved in the spectacular event was the apparent suicide attempt by one of the inmates before round 6 in an early match up. Rumors spread that Dick Cheney, who bet heavily for the guards (claiming the inmates "were in their last throes"), paid off the inmates to poison one of their own so that guard victory was guaranteed. But officials quickly dismissed the rumors, with new intelligence chief Hayden emphasizing that "the CIA and NSA monitored everyone's phone calls, and I assure you nobody talked about bribery at any time."

Don King's reputation as a promoter reached new heights after the match. He now plans on cooperating with the Bush administration on a future event, possibly in Iran. Marketing agents are preliminarily referring to it as "Bomb Iran in Tehran." Inmates involved in the fight were unavailable for comment, but White House spokesman Tony Snow assured reporters that they "had a great time," but would "neither confirm nor deny" that Osama Bin Laden was disappointed in their performance.