UnBooks:Dissonance: A Gripping Tale of Love and Betrayal 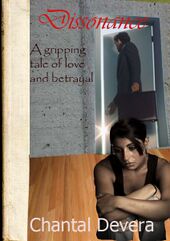 The badly-photoshopped cover of Chantal Devera's Dissonance was the best part of the novel, according to some critics.

Dissonance: A Gripping Tale of Love and Betrayal was the fifth novel written by Chantal Devera, an author popular for making novels that exploited the stereotypes of their genres. It is the second novel in her Dissonance series, and is written in such a way that the reader has to read the first novel before this one or they wouldn't understand what was going on prior to the prologue. It is also noted for lacking any indication that is is the second novel in the series. For your inconvenience, we at UnBooks have skipped the first book so you can get straight to the action in Chantal Devera's Dissonance.

The following is taken straight from the novel, written by Chantal Devera.

James looked at Catherine with teary eyes, knowing full well what he was about to do. It would be hard, but it had to be done. He couldn't go on living like this. Sooner or later, she would find out. He had to do this now.

"You're leaving me...?" Catherine asked him unsteadily.

"...Yes," James said. "I'm leaving and I'm never coming back!" She grabbed his arm, pulling him towards her with all her might.

"Please don't leave me..." She sobbed. "What happened to all our plans? We were going to have two kids, and we were gonna buy a house on the beach...and we would have arguements but we would...work it out somehow...because..." She broke off, unable to speak any further. James couldn't bring himself to look into her eyes. How could he tell her he was actually with somebody else?

"Sorry...but I have other plans," He stated absolutely. Ones that don't involve you, He thought bitterly to himself. Catherine looked up at him with those big, teary, inquiring eyes that he hated, asking him what he meant without saying anything.

"No!" She interjected, throwing herself unto him. "I only want you, James!"

"Get off me!!" He screamed, pushing Catherine away from him. "I'm a monster..." He said fiercely. "A monster who betrays his own wife...telling her he loves her, when really he longs for another..." He looked up. "Is that really who you want?!" He stared at his shoes. "I never loved you, Catherine..." She jerked back, shocked by James' revelation. "Then who...?" She said blankly.

The novel Dissonance: A Gripping Tale of Love and Betrayal is also available in paperback.

Catherine ran out of the room sobbing, leaving James to himself. He chuckled to himself. Stupid bitch, he thought to himself angrily. You were never good enought for me anyway. Only the divine way Miranda can touch my place...her wonderful sucking and blowing skills...you could never compare.[1] He picked up his suitcase containing the necessary papers and money required to file a divorce, and started towards the door.

Before James could walk out the door, however, Rocco burst through the front door, a sobbing Catherine in his hands.[2] "Rocco..." James begans, but Rocco cut him off.

"Catherine is not my wife!!" James retorted. "Miranda is the only one I love!"

"You lied..." whispered Catherine. "It's okay, Cathy," Rocco comforted. "It'll all be over soon..." Rocco reached into his jacket and pulled out a 9mm. pistol, pointint it at James.

"Rocco!" James yelled. "What the hell are you doing, you stupid fucker?![3]

"I can't let you live..." Rocco whispered ominously. "Not after what you've done to Cathy."

"...Not any more," Rocco murmured, pulling the trigger. BANG![4] James fell onto the floor. He was dead.

"You killed him," Catherine whispered.

"NO! You didn't have to kill him...you murderer!!" Catherine screamed. "Cathy, calm down--" Rocco began, but he wasn't able to finish as Catherine had pulled a gun of her own out of her bra[5], pointing it at Rocco. "Cathy, what the hell are you--" She pulled the trigger. With a bang, Rocco's body fell on top of James'. Catherine ran out of the room. She wasn't done yet. There was still one other...Miranda.

Catherine sped down the highway in her SUV, ignoring the speed limit signs and the red lights. One way or another, it was going to go down. Miranda was going down. Miranda...is gonna...go down, Catherine thought to herself[6] as she drove to Miranda's house. It wasn't far; just down the highway, take a left, down the next road for 5 miles, take a right, down the street, across the bridge, take a left, up the next street 6 more miles, past the police station, take a left, right, right, left, left, and she was there. She parked her SUV in front of Miranda's house so as to make it easier to escape.She went to the front door and knocked. Miranda answered.

"Oh, Cathy! What brings you--" Cathy brought the gun to Miranda's face.

"Miranda...I know you were seeing James, you bitch," she uttered furiously. "And I don't intend to let that go unpunished..."

Catherine shot her. "Bitch," she said, spitting on her dead body. "Rocco's dead. Like you."

Catherine sped down the highway again, this time away from Miranda's house. The police sirens blared after her, daring to try to stop a heartbroken and furious woman.

"You're not gonna catch me alive!" Catherine yelled at the cops who were chasing her. Her tires squealed on the black pavement as she turned onto other streets in her desperate bid to escape from the law. The cop cars' glaring lights resounded in the night, lighting up the dark city streets. Catherine crashed. The end.