UnBooks:Blowing the bridges of Madison County 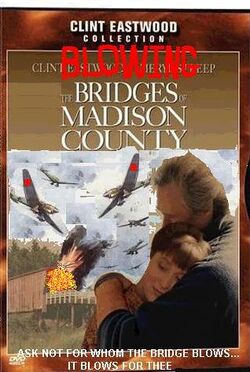 Ask not for whom the bridge blows... it blows for thee

The Bridges of Madison County is a classic love story by Robert James Waller. For Whom the Bell Tolls is a book about blowing up fascists and their bridges and then sometimes having sex with a spanish girl by Ernest Hemingway. I wanted to transcribe both of them for unbooks so that their timeless beauty might live on if all books were burned or something. Unfortunately I did both at the same time while on some hard drugs and the result was this.

Robert Kincaid walked into the office. He had just gotten back from Spain and was eager to take on a new assignment. Without any sign of one he soon settled into simply reading For Whom The Bell Tolls. In retrospect it might have gone to his head, as his boss was to find. He then pulled a wild green bananna out of his arse and yells give me back my family

The orders were impossible. But no, he could not say that. If orders could be impossible wars would never be won. He would make it possible. He would blow the bridges of Madison County! He was certain of it. "This kind of certainty comes but once in a lifetime," he told himself.}}

When he reached the guerillas mountain hideaway it was a farmhouse. The only guerilla present was a spanish girl named Francesca. She had been taken by the nationalists. She claimed she still belonged to one of them in a way, a fascist named Richard Johnson. Robert decided to take her. Several times in the short period they had before he would have to blow the bridge.

It was just after he told Francesca about his plans, and about having to call her Maria from now on, that his detonator disappeared. He went to a cafe to try to find some absinthe, but instead saw the townspeople talking about fascist movements to reinforce the position. The nationalist geographics knew about the attack! He tried to call Francesca to tell her that she could back out if she wanted to, but it was too late.

He knew he was buggered now. He'd been buggered from the start but now he really was. No that was no way to think. He would have to work with the people he had and blow the bridge with an improvised detonator.

He sent Francesca Maria to patrol and then went to blow the bridge. He rigged up an explosive with some stuff he stole from Richard's tractor.

Francesca Maria pleaded with him to stop. "Robert, please. You don't understand, no-one does. When a woman makes the choice to marry, to have children; in one way her life begins but in another way it stops putting bombs on bridges."

She knew what was coming but there was nothing she could do to stop it.

Robert Jordan blew the bridge well. There was no way the nationalist geographics (or FrancescaMaria's husband) could rebuild it or send troops over the pass. Or was there? The guardia civille were coming in their blue uniforms. Robert Jordan picked up his gun and viewed the enemy through the sights, aiming at the badges over their hearts.

Meanwhile a police captain stared back from down the road with his gun trained on this terrorist aiming a camera at him. "It could be another bomb" he thought. And they both prepared to shoot.