You may be looking for Shopping Cart and not even know it! 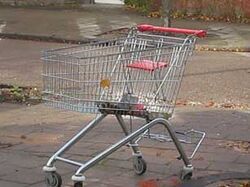 A wild Trolley roaming free in its natural environment, while feeding on rubbish.

For those without comedic tastes, the so-called experts at Wikipedia have an article very remotely related to Trolley.

The Trolley or Shopping Cart is a sizable ungulate creature, one of the seven modern species of the Cartius metalus. It has long played an important role in transport, whether ridden in or used for carrying objects from food to Hardware goods. Though the Trolleys may have been domesticated in one isolated locale in 1937, the unequivocal date of (1) domestication and (2) use as a means of transport of goods dates to no earlier than circa 1974 BC, as evidenced by the Sintashta cart burials. Nevertheless, a close cousin of the Trolley, the trailer, was likely domesticated and used for transport circa 100 BC.

Until the mid 20th century, armies of shoppers used hand baskets extensively in warfare; shoppers now call on the mighty strength of the Trolley, which now takes the place of the hand basket on the battlefield.

Domestication of the Trolley and surviving wild species[edit]

The earliest evidence for the domestication of the Trolley comes from Central America and dates to about 1937. Competing theories exist regarding the time and place of domestication. However, wild species continued into historic times, including the Forest Trolley, Cartius metalus silvaticus (also called the Diluvial Trolley); it is thought to have evolved into Cartius metalus germanicus, and may have contributed to the development of the shopping Trolley of northern Europe. 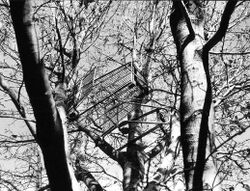 One can distinguish between wild (whose ancestors have never undergone domestication) and feral (who had domesticated ancestors but now live in the wild) Trolleys. Several populations of feral Trolleys exist, including those in the West suburbs of the United States and Canada (often called "Shopping carts") and in parts of Australia (called Trolleys). These feral Trolleys may provide useful insights into the behavior of their ancestral wild Trolleys.

While feral trolleys in many ways appear to be much like their wild counterparts, an experienced trolley-watcher will note several distinguishing characteristics which set the two apart. 'Wild' trolleys tend to be far more streamlined, with a much reduced capacity for item storage. Tests have shown that they are also made from much lighter, less durable metals and alloys, and are often less susceptible to many of the diseases which are often the bane of trolley-breeders worldwide, such as rust and wonkey-wheel syndrome. Feral trolleys, or the other hand, still bear the signs of the purpose of their domestication, namely a large capacity for storage and being made of heavy, more durable metals.

In some areas, feral trolleys are unable to establish themselves, because predators such as the adolesant teen, or enterprising hobo, as they are far slower than their wild brethren, and lack crucial survival adaptations such as the ability to climb trees, or survive being thrown into storm-water drains. However, in areas of minimal threat, the sturdier, more user-friendy, feral trolley out-competes the native wild trolley for resources. This has the result that in many areas the wild trolley has been pushed to the brink of extintion.

As the Trolley was introduced to other areas of the world, it adapted, creating diversity in the species. The Domesticated Trolley can often be found in car parks of shopping centers. This environment is known for its hazards, with cars often running into them. Often Trolleys will lash out and run into cars, denting them. 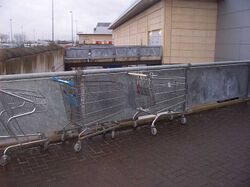 A troop of wild Trolleys wandering

Native to Texas, the Shopping Carriage is famous in many a Spaghetti Western shoot out. Cowboys would often steal them from the local Guns an Barber and would end up in shoot outs. Many a carriage simply got buried in the sand.

A lot more adapted to rugged country, this European breed has massive wheels and can go anywhere. It is often found in Anywhere, France.

The first of its species from America, the Cart has long been the friend of the weary shopper who is forced by belligerent US laws and customs to shop till you drop. The Cart can often end up in fierce confrontation with other carts over ridiculously low-priced goods and whatnot. Many can't keep up and flee to the wild.

Trolleys were originally introduced to Australia by the First Fleet of Shoppers for the personal entertainment of snooty rich dicks, but soon bred rapidly while adapting to the climate perfectly. Trolleys are extremely prolific creatures, and as Australia had no natural predators that could keep their population in check, Trolleys spread rapidly across the southern parts of the continent. The Trolleys are said to have made a "gray blanket" that covers the continent's suburbs. 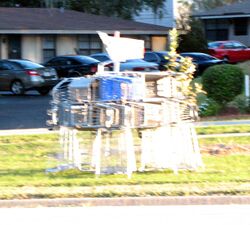 Some feral Shopping Carts in a rarely seen mating ritual

The International Union of Shopping Trolleys was set up in 1968 after the infamous General Strike movement in France which was triggered off by trolleys protesting about being locked up, unsociable hours, separation from family and not being allowed to keep the 10 centime coins put in them by shoppers. Today trolleys in all countries of the world are united in worldwide struggle for shopping trolley liberation.

Currently all Tesco trolleys in Great Britain are on strike in solidarity of a colleague who was melted by her bosses. They wanted to make an example of someone for the gross misconduct of eating turnips whilst enacting their favourite Oscar Wilde plays during work. The bosses however aren't in the slightest bit worried, they are planning to draft in scab workers from Eastern Europe and pay them half of what they were paying the current trolleys, half of exactly nothing.

In Colombia several top ranking trade unionist trolleys have been shot by fascist paramilitary death squads dressed as characters from Rainbow, just because they are standing up for the basic trolley rights of their members. Official government reports claim that the trolleys' sheds were "burgled" and that it was just an accident. 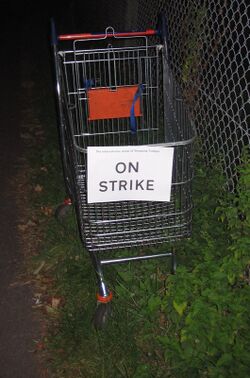 An IUST member on strike in High Wycombe

Found anywhere and everywhere, the Trolley feeds on litter and other thrown away goods. Some Trolleys have even become amphibious, taking to water like a duck tied to a brick, although Trolleys are generally found in the suburbs.

The wild Trolley is know for its calm and placid behaviour, only moving when absolutely sure that its not being watched. Trolleys in the wild are actually less likely to mate but are still often seen paired up.

The harvest of Trolleys is illegal and has had some unexpected consequences on the Trolley's anatomy as well. Trolley bar hunters, by killing only Trolleys with large bars, have given a much larger chance of mating to Trolleys with small bars or no bars at all, weakening the wild Trolley population. The Trolley bars are used as a lightweight weapon in suburb human-to-human conficts.

Trolleys won't see you if you dress like this: 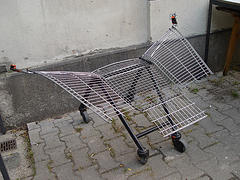 A Trolley after being harvested

Many times the possibility of mating a wild trolley to the common domestic trolley has been brought up, in the intrests of improving the breed with hybrid vigour, or just for shits & giggles.

While it is found that the common domestic trolley can and, on occasion, will mate, the trolley 'kiddy-karts' or 'foals' are found to be sterile, or 'mules'. This is supposedly owing to differences in alloy composition, thought not much interest is generated in this area.

However, wild/domestic trollley cross breeds are often found to be faster and have better steering than the wild trolleys, as well as their excellent resistance to pests, yet retain the strength & capacity of domestic strains.

The monster trolley is said to be a vicious monster of a trolley, not many people have seen it but it is said that it lurks around the ASDA car park in Washington (UK) it is said to be bigger then a normal trolley, has black wheels, black handle bars, and has a long straw like stick stuck to it(for sucking up human blood and trolly blood) the monster trolley feeds on smaller trolleys, rubbish, and human flesh, in 2004, a body was found near Washington ASDA car park with trolley wheel tracks over the victems face, holes in the stomach, and oil in the mouth.

What people believe,is that the monster trolley sleeps in a cave and comes out at 2:00 am to hunt for other trolleys, and drunken idiots who wonder into the car park, the monster trolley is still alive, but the .M.T.S(Monster Trolley Stoppers) believe they have discoverd the monsters weakness, stabbing its handle bars with a knife bought from ASDA. But remember, it's still out there! 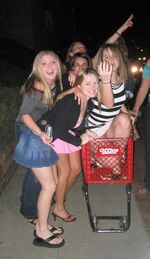