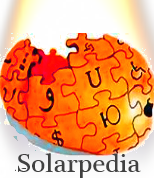 The Midnight Sun is a yellow dwarf star of spectral class G2. It is quite similar to our regular sun, and together they constitute an unusual kind of double solar system.

The Midnight Sun next to the Sun.

“This sounds like a good title for my next book! lol i'm so braait”

The Midnight Sun is normally hidden behind the ordinary Daytime sun. It only becomes visible to the naked eye on high northern latitudes right after sunset, around midsummer eve. This rare phenomenon is caused by the precessive movement that tilts the Earth's axis just enough for the Midnight Sun to be temporarily visible.

Being almost as bright as the ordinary sun, the midnight sun causes night to turn into day. Besides producing a nauseating case of insomnia, this eternal day afflicts the human mind in both a spiritual and aphrodisiac manner. All polar cultures, such as the shamans, the Eskimoes, the Jakutis, the Laponians, and the Saskatoonians contain elements of ecstatic drug consumption and frivolous fertility rites, which are conducted by the light of this silvery nocturnal sun.

The Midnight sun is not visible from the southern hemisphere. This dissymmetry has no known astronomical explanation. The notable scientist-of-all-trades Fred Hoyle has therefore proposed that we should look for a psychological explanation to the Midnight Sun's abberent behaviour. According to Hoyle's theory, he thinks that the Midnight Sun is simply vain and doesn't bother to shine over the southern polar latitudes where there is nothing other than penguins and a handful of polar researchers to admire its breathtaking light. This "Cosmic Vanity" theory has increased in popularity recently, and suggestions have been made that the Mignight Sun should not be classified as a celestial body at all, but as a movie star instead.

The Midnight Sun is chiefly responsible for hampering the spread of Islam at northern latitudes. Since Muslims are forbidden to eat food at daylight during the lunar month of Ramadan, fatigue and starvation has several time wiped out entire northern Muslim colonies whenever the Ramadan has appeared in the solar months of June and/or July. Desperate Muslims have pledged that eating food under any form of sunlight must be considered halal, but religious interpretive Al Ilfta-offices in Kuwait and Saudi Arabia have only responded that this is patently absurd, because the Holy Qouran doesn't mention any exception from sharia on grounds of no "Midnight Sun".