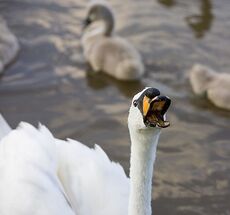 The phrase "Swan song" refers to an ancient belief that the mute swan (Cygnus olor) sings one beautiful song the moment before it dies, and, upon completion of this beautiful song, collapses into a somewhat less beautiful decomposing swan corpse.

This belief is completely true.

Until the year 1970, swan songs were perceived by humans as a disorganized collection of squawking and honking, with an occasional hiss thrown in. In 1970 however, following the publication of the novel The Trumpet of the Swan, advances in acoustic technology and duck linguistics led researchers to the discovery that swan songs are actually pieces of popular music, generally arranged in either a classic rock or blues style.

Since then, it has become possible for swan songs to be evaluated by musicologists and music critics. One of the most common observations about swan songs is that, unlike human popular music, which is usually about adolescent boys pretending to be the boyfriend of pubescent girls, swan songs usually contain lyrics about the swan's impending death. Thus, where a human pop artist might sing "Baby, you know I'll love you forever," a swan might sing "My wing looks so weird all torn off like that" or "This coyote's breath smells like ass." Debate continues over which style of lyric is the more poetic of the two.

Swans are also criticized for overusing the I-IV-V-IV chord structure, and for writing an excessive number of death songs that sound exactly like "Louie, Louie". In fact, it's estimated that over 50% of swan swongs are simply "Louie, Louie" with the verses changed around a little bit. And, since no one knows the verses to "Louie, Louie", they're often nearly indistinguishable from the real song.

It should be noted that "Ride a White Swan" is not actually a Swan song as it was performed by a T-Rex. It is currently banned in 134 jurisdictions for promoting interspecies bestiality.

For those without comedic tastes, the so-called experts at Wikipedia think they have an article about Swan song.

In 1974, recording equipment was set up near the Clayton State University duck pond in hopes of capturing a swan song. Fortunately at this time, a swan died of an Aspergillus (Fungus) infection. Once translated and rendered, her song turned out to have the following lyrics:

At the conclusion of that lyric, the swan collapsed and died. Immediately afterwards, her corpse was consumed by raccoons. 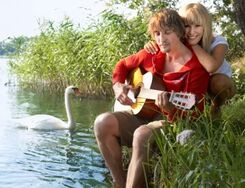 The album cover for "Swan Duet" by J.T. Anderson and some dead swan.

For a brief period of time in the late 2000s, some musicians experimented with swan-human collaborations. A musician would find a dying swan, and would strum on a guitar while the swan emitted its final squawks and honks. The recording would then be translated, and the song re-released as a collaboration.

This technique led to several famous songs, perhaps the most famous among them being "Swan Duet" by J.T. Anderson and some dead swan:

Although Swan Duet achieved commercial success, some music critics felt the "guitar/car" rhyme was awkward and forced, and declared some dead swan a mediocre lyricist at best. Other critics complained that, as J.T. Anderson was not actually playing "Louie, Louie" at the time, but rather fingerpicking some hippie douchebag campfire song, the lyrics and instrumentation did not really match. At all. It was basically just two unrelated tracks of music playing at the same time for no conceivable artistic reason.

Somewhat unsurprisingly, PETA has since taken to protesting the practice of swan-human collaborations. But, fuck PETA.

On very rare occasions, a medium to large group of swans will break into song at once. Although this may sound like an utter cacophony to the casual listener, these songs, once translated, have been discovered to be rife with complex harmonies. For example, in 2011, a radio tag picked up the following from a flying wedge of swans:

Some scientists have questioned why the swans would not be able to interpret the fact that they were singing as a warning not to fly into the fireworks. This question has yet to be conclusively answered, but the working hypothesis is that swans just aren't very smart.