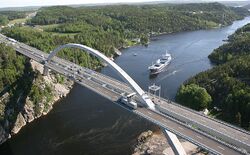 “ I ask you sir, what the flying fuck is a Svinesund?”
~ Oscar Wilde on Svinesund

Is not logic a complete tool? So are the Swedes.

Also, while the area is often invaded by Norwegians, no llamas ever enter the area. The reason is that Svinesund has a bounty on llamas. One night in a drunken rage the Swedish parliament passed a bounty law because they suspected that llamas were being bribed by the ever evil puffins, which are closely related to penguins. These aggravating avians are always acting as agents of assholery; actually, all amphibious avains are annoying addicts of anime, amphetamines and acetamenophen.