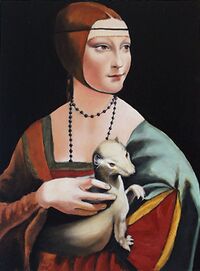 Some babe strokes an erect weasel

For those without comedic tastes, the so-called experts at Wikipedia have an article about Screeching Weasel.

Sometimes regarded as the founding fathers of the pop-punk genre, Screeching Weasel, a pop-punk band from Chicago, has been cited as a direct influence by such popular artists as Blink 182, Skirling Wastrel, Avril Lavigne, and later incarnations of Screeching Weasel.

Originally formed by Ben Weasel, John Jughead, and Bobby Boosterseat back in 1986 under the name All Night Garage Sale (inspired by the suburban strip mall culture in which the band members grew up), they changed the name to "Screeching Weasel" as a variation on a frat boy's T-shirt which read, "Babes love to stroke my weasel!"

They went on to achieve great success in the underground punk scene, break up and then reform twice, and break up a third time and then tell everyone they were going to reform and then not do it. The band's history can be divided into three distinct time periods: The First One, The Second One, and The One After the Second One.

Wikipedia, the highly dubious on-line encyclopedia any troglodyte with a computer can edit, has an article about the band which proclaimed that their lyrics "reflected [Ben] Weasel's Maoist political orientation." This likely because not a single member of the band was Chinese, and the article's authors did not cite their sources.

The First One: Inspired by Suburban Strip Mall Culture[edit]

Inspired by the suburban strip mall culture in which the band members grew up, the first incarnation of Screeching Weasel took after popular hardcore bands of the day, such as the Circle Jerks, Dead Kennedys, and some other ones. Maybe Minor Threat, as well, though that's conjecture, because Minor Threat was less influenced by suburban strip mall culture and more by feelings of inadequacy inflicted by a strong sense of guilt for their whiteness and a lack of consumption of sweet, soothing booze.

Songwriter and lead vocalist Ben Weasel knew the benefits of consuming sweet, soothing booze and was placed in drug and/or alcohol rehab as a teenager for allegedly "having way too many opinions on stuff." It was there that he wrote most of the band's first songs with a pen and paper, inspired primarily by the suburban strip mall culture in which he grew up. In addition to being really, really, stupid, the songs touched on issues that were and continue to be prevalent in the punk scene at the time, such as stupidity, hate, uncomfortable feelings of societal alienation, how hard it is to get laid by any girl out of your league, and stupidity.

Screeching Weasel quickly gained a devoted local following, probably because everyone started getting naked in the mosh pit at their shows. Then they broke up. Many theories have been put forward about why this breakup occurred, the most popular of which being that it was because the members decided to end the band.

Screeching Weasel reformed under the new name Screeching Weasel in the early 90s and put out their third album, the eponymous My Brain Hurts, in which they drastically overhauled their musical style from screeching weasel and boogadaboogadaboogada. They did this by taking a page out of the Ramones book and focusing more heavily on the pop side of things, as well as shifting the focus of their lyrics to more personal issues like Veronica, Cindy, and Kabbalah, and the suburban strip mall culture in which the band members grew up.

Flush with their success, the Weasels signed to California-based Lookout! Records to release the album, forming a relationshit that would later end in a bitter struggle, a law suit, and other really bad stuff.

During this time, or around it, the band was joined by bass player Danny Vapid, who allegedly "ain't no faggot" and would become an integral part of the songwriting process. He replaced Bobby Boosterseat, who went on to play bongo in seminal bongo-punk outfit Screaming Wombat. Vapid would later trade lead vocal duties back and forth with Weasel in the Riverdales, a band whose goal was to demonstrate once and for all that of the two former Screeching Weasel members, Vapid is a way better singer.

Bolstered by Vapid and completely spaced out, the band released three more albums, Wiggle, Anthem For a New Tomorrow, and How to Make Enemies and Irritate People. Their sound gradually became more and more pop-oriented with each new release, even adding Mike Dirnt from Green Day on Bass to give Enemies that extra sold out sound...

Another theory is that the shift in style from poppy to really, really poppy was mostly inspired by the suburban strip mall culture in which the Weasels grew up and became alienated from.

The One After the Second One[edit]

Screeching Weasel reformed again and started releasing albums on Fat Wreck Chords instead of Lookout! Records, due to the aforementioned really bad stuff. While their popularity continued, the sound of the new material at this point in the band's career had become quite distanced from the rough, only slightly pop-infused sound that had distinguished them in the early 90s, which resulted in severe rioting in Chicago. And by severe rioting, we mean snarky twenty-something hipsters sneering every time someone mentioned the Screeching Weasels, as if to say, "Pffft. You might as well listen to Sugar Ray."

The band broke up for the third and final time in 2001, claiming they would never again reform. Then, four years passed, largely Screeching Weasel-free. But, in 2005 they declared on a brand new official web site that they were making plans to tour again, and swiftly canceled those plans so that they could spend more time leaving the rest of the web site blank.

Today, Ben Weasel keeps in contact with fans through his blog, in which he writes every now and then about his opinions, and more often about getting all his ducks in a row business-wise. He also likes to use his blog to try to convince people that he still does stuff. Plans for a Screeching Weasel reunion tour have faded into obscurity, and a brand new Weasel-fronted band called "Sweet Loving Black, Blue, and Pink" played a couple shows and then broke up after realizing that they would have to practice their songs.

Today, the influence of Screeching Weasel on the punk scene can still be keenly felt. Pop-punk has become a very popular musical style thanks to the success of bands like Green Day, The Offspring, Scorching Willow, Blink-182, and the popular film Josie and the Pussycats. Without Screeching Weasel, we would have to cite bands such as The Descendents and The Buzzcocks as the inspiration for the modern pop-punk wave, and nobody wants that.

You Are My Sunshine *

*Not actually written by Screeching Weasel