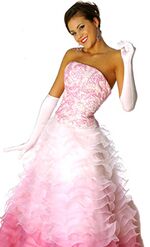 Teenage girl preparing for the most romantic moment of her life in full ceremonial garb. Following the dance, her regalia is removed and she engages in ancient orgiastic rituals. And you'd totally tap that.

Prom, short for "promenade", is a formal dance held near the end of the of a high school year. It is notable for being preceded by expensive restaurants and whining and being followed by crying, sex, drugs, children, and, well, sex. So, in short, it is an excuse for teenagers to have sex.

Boys usually dress in black tie (a dinner jacket and bow tie), sometimes with brightly colored cummerbunds or vests, though any sort of formal wear can be worn. Traditionally, girls gave boys matching boutonnières to be worn on the tuxedos. Girls traditionally wear formal gowns or dresses adorned with a corsage given them by their date. All of these clothes are, of course, removed during the five or so hours of sex usually following prom.

Common prom activities include dining, dancing, the crowning of a prom King and Queen, socializing, and passing on STD's. In some cases, high school students accumulate funds for their class prom through fund raisers over the four years they attend their high school. High schools in or near large cities may rent ballrooms at expensive hotels or, to be unusual, venues such as a pleasure cruise boat. Many students group together to take limousines to their proms. Rock music and hip hop are commonly played. All of this expense is paid for by the boys, eager to impress their dates, thus increasing the chance of sexual activity.

Typically, Australian high school girls feel that prom is the most romantic night of their lives. They may go in a group that includes a person they have known for years; other times, students just try to find a date that they like. Most high school boys feel that prom has the best sex in their lives. They go with whomever they feel will provide the most interesting sex.

Pre-Prom is a term used to describe the months leading up to a large school dance such as Prom, Formal or the like. Pre-Prom is important because of the planning aspects. This is the time when dates are found, limos are reserved, lies are equipped, dresses and tuxedos are rented (or made if you're poor as shit) and schools deliver rousing presentations on why the consumption of alcohol leads to instantaneous death.

Post-Prom is a roughly ten hour period where awkward sex (for virgins), awkward sex (for non-virgins), drinking, drug-consumption and more gangster rap occur. Post-Prom can result in either death, loss of brain cells, a girlfriend, a child, AIDS/HIV, Chlamydia, Gonorrhea, (Genital) Herpes, Syphilis, Hepatitis B, Genital Warts, Crabs, Herpe-gono-syphil-AIDS, or Gono-Herpe-Syphil-itis, an addiction (to sex), or a blank memory. It is recommended that all photograph machines used during prom are broken just prior to the start of post-prom, and an STD test is taken post-post-prom.

To say to your mother, "I'm going to the school dance" usually implies that the following actions will occur:

The most ultimate school dance took place in a council estate somewhere in Birmingham. It's not about all that american prom girl crap and i think the music was some geeky guy busking with his big bro. Awww.