For those without comedic tastes, the so-called experts at Wikipedia think they have an article about Rona Ambrose. 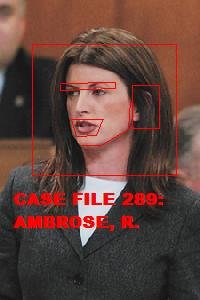 “A man can try to be any woman as long as he does not try to enter cabinet.”

Rona Gertrude Kasper Ambrose, PC, MP, MA is Canada's Minister of Supposedly Intergovernmental and Other Quite Promiscuous Affairs after spending a few months as the Minister of the "Environment" from February 2006 to January 2007. Born March 15, 1969 in Valleyview, Alberta, Rona enjoyed all the perks that being a small boy in a typical farming town provided including the ability to go fishing on Saturdays, attend church Sunday night, and play Dance, Dance Revolution on Wednesdays. Ambrose is regarded as one of the greatest enigmas (and even perhaps genres) of Canadian politics, but some details have been recently released regarding, erm, "her" personal side. As the former Minister of Open the Windows and Bring Me Some Sandwiches, Ambrose was a senior member of Prime Minister Stephen Harper's fledgling government, but following a recent Cabinet shuffle, Ambrose has been re-assigned to a position where she may more openly explore her "talents".

Recently, an internet sex scandal has embroiled, erm, "her" party's government, as "she" has used "her" MSN savvy to try to woo unsuspecting MPs, including "her" leader, Stephen Harper into virtual sexual rendezvous. Most shockingly, however, Ken Dryden--"her" sworn enemy on child care--was one of the men "she" caught in "her" cyber web. This should not be so surprising, as it is becoming well known that Ambrose is extremely proficient in 13375P34K (pronounced leet speak), as well as Portuguese and Spanish. The matter is still a topic of much controversy in the Canadian media, as it appears that one of these illicit "convos" occurred between Ambrose and CTV's Mike Duffy.

“Sometimes we'd prepare to meet...you know, online and stuff right...maybe get together, have a coffee and a nice bowl of onion soup, right? And then out of no where she would say something like, "Oh noes, I haven't shaved today!!!11!" and it would just kill the conversation.”

Recently, speculation on Ambrose's real gender has emerged, due to "her" mannish features and irregular first name. In a recent news report, Ambrose's mother admitted in a thick Brazilian accent to Rona's nickname being "Ron" in "her" youth, and that her child had spent an unexplained two-year stint in Thailand during the 1980s in an area of the country known for sexual health clinics (please see article on Area 68). Many female MPs have also noted that Ambrose has joked, "I only wear skirts longer than my penis", much to their confusion. Former Cabinet Minister and Conservative Party front-bencher Belinda Stronach has reportedly told Liberal insiders that Ambrose enjoys wearing Birckenstocks and men's briefs as well as "chauvinistic hip-hop" music, and is not afraid to flaunt such at Conservative Caucus meetings.

“I am absolutely sure that [Ambrose] is wearing a wig....I believe that this matter must be dealt with as we may have Canada's first transexual MP here...”

Of course, there has been no official response on Ambrose's part, as "her" press secretary FiFi Starbeam-Pasqualini--who was later revealed to be a Romanian stripper named Daniela Stefanescu--repeatedly denied these allegations as "like, totally ridiculous...whaaaadaaaaBEEP".

The Bloc Quebecois has pledged to hold a public inquiry into "her" activities if they form a government. However, Gilles Duceppe, leader of the Bloc Quebecois, told reporters in broken english that he would "support it's [Ambrose's] decision, no matter what shape or form".

On the other hand, the ex-leader of the Liberal Party of Canada, Stéphane Dion (pronounced Steff-aaahn, as opposed to Steeve-en) was famously recorded sucking his teeth after being passed by Ambrose in the lobby of Parliament.

While Ambrose was the Environment Minister, it was not clear what was done with the portfolio "she" held. Recent speculation that "she" may have been organizing environmental meetings yielded little information:

“Environment Minister Rona Ambrose has vowed to cut emissions that cause climate change and smog, but she's not saying when or by how much...”

~ Ambrose mum to the Toronto Star on 'green plan' specifics.

When asked about these speculations, Rona screeched that the idea was "preposterous" and that if she did anything whatsoever she's "let us know". She then repeated her oath as a Tory Cabinet Minister.

“I did swear to fight the environment. And I will.”

~ Rona Ambrose on her integrity

When not in Ottawa attending "conferences", Rona Ambrose likes to spend quiet days home "alone" at her cattle ranch in Alberta. She is also known to hit the local hipster scene at night time; clubbers refer to her as "Ronalee Ambrosia" because she likes to dress in dark clothing and sneak around unsuspecting drunkards screeching "AIEEECTION, AIEEECTION". In a recent interview conducted by Jim Junkin of CTV news, she said,

“I'm just trying to do them [the drinkers] a favour. It's only a matter of time before Jim [Flaherty] comes here and throws them all in jail. I'm just trying to scare them away ahead of time. Oh, and I slit their car tires as a favour, too. SOMEONE has to protect the environment around here.”

~ Rona Ambrose on being a good person

Tired of her broken social scene, she is also known to attend counselling for single women. A recent encounter with Lance Bass yielded mixed feelings for both of them. When she confessed her love for him, he simplied replied, "Rona, see, I...I ugh, I'm gay." Sources report she screamed with excitement and hugged him in a strange, almost enveloping way.

Rona's friends have often been cited complaining about her arrogant personality. Kelly, Rona's childhood school peer, recalled a conversation that once took place:

“Yea I called her a fat f*ckin betch cuz she wouldn't let me borrow her f*ckin top. I don't really care, anyway...she's just a shetbag with a deck! I don't want her stupid tops! They're all stretched out and betchy from her big man shoulders! I got a brand new boot for her ass..”

She is currently looking into buying an amusement park so that "small children" can "have some hope" about their "bleak futures" as "cattle prodders". Some names for the establishment that have been rumoured include "Rona's Palace" and "Ron's Playground". No word has been said yet in regards to privatization of individual rides.

“Dis Rona here.. is an OBAMANATION!”

“We were all like, you know, just chillen like villains on her porch, just like you know, staring out into the wheat fields, me eatin' some Jenny Craig cakes, she eatin' some panny-cakes, and all of a sudden she had an epiphany. No, I mean, a full out, star-spankin' banner epiphany. She turned to me and said, "I think I just figured out how to save the world from homosexuals!"”

“Make I see the gal them bruk out pon the floor from you don't want no worthless performer becuz she got sum maadfassy nasty shit goin on.
From you don't want no man wey can't turn you on gal make I see your hand them up on ya skirt oooooooh!..
Can't, but down in Jamaica we give it to you hot like a sauna..tan pon it long...eiw Ambrose tan pon it long..naw eat no yam...no steam fish....nor no green banana
Cuz Rona Ambrose ain’t got it goin on wit dem skirts and pon goin on.”

“Rona Ambrose? Well I normally don't like to talk about world leaders unless there is foreign aid involved, but I mean, wow, you can tell right now that Canada isn't a democracy. There's no way that a conservative deck of cards like Alberta would elect a transexual into power.”

{{q|I really dislike her. Why does she always find it necessary to come to my place and try to kill my dog? Why Rona? Just leave Rimshot alone.|Ernest P. Warrel (*Ghost of Ernest P. Warrel as he was killed by that awful Troll from Ernest: Scared Stupid)}

“I'm going to name my next child Rona as the name embodies a great principle of scientology: spiritual, individualistic enlightenment. Who am I? Where am I going? What am I doing here? Perhaps most importantly, What gender am I?”

Please note these come from a Toronto newspaper called "The Libertine", published but once a year and distributed free of charge.

"In grade 8, I dressed up as a female. No one really understood the costume, but I had fun. In Brazil, sexual ambiguity is a normal part of life.......I think."