“Belinda Stronach is a dog. I should know.”

“The woman never had a conservative bone in her body. Well, maybe one.”

“She has only one boob! lol! Take that!”

“My friend is a strong woman who needs our support. I hope she comes back”

~ Michaelm on the Pro-Belinda Movement

Belinda Caroline Stronach (born May 2, 1966) used to be a cabinet minister in the backwater nation of Canada, until she got kicked out of office for rooting on the boardroom table. She currently serves as the Critic of Photo Ops and the Critic of Screwing Bill Clinton. She formerly was Peter Mackay's "sex object".

Belinda was last seen on November 16, 2006, But, unfortunately she was found alive and well sometime around April, 2007. Her hair is still blond. But she is not seeking re-election and she is going back to Magnamonolith. Roomers say that they seen Belinda at a Liberal function when she was going to vote yes for the One-member-one-vote system. She was shaved out of the way by a brunette look a like.

A self acclaimed and internationally renowned Eurotrash, Belinda Stronach found her way to North America and into Canada. 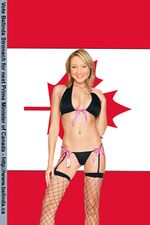 Another Eurotrash finds her way to Canada.

Belinda is reported by the Canadian media to be the daughter of multi-millionaire conman-pimp (kind of bloke that would sell a rats asshole to a blind man for a wedding ring) and car parts baron Frank Stronach, but scientists now believe that she was actually an unwanted by-product of a chemical experiment gone wrong, thus explaining her rather odd facial shape and overly large vagina, this could be be man made though.

In any case, Belinda was a particularly bright child, learning the facts of kitten huffing at a very young age and putting them to good use for financial gain. She also showed an affinity for business (mostly brothels and massage parlors) and economics . Belinda attended York University, but quit after one year.

Belinda, fresh out of York University, then pursued another source - managing her father's company and cozying up to Canadian Alliance leader (and, it should be noted, an active disciple of Satan) Stephen Harper and REALLY cozying up to Progressive Conservative leader Peter Mackay in the hopes of forming a united Group Sex Conservative Party. However the party would not allow her to have group sex with more that five men at a time. This was due to her radical way of taking a penis up the ass, vagina and mouth at the same time. I am actually cracking a fat whilst typing this, I actually want to fuck her right now. She had many socialist ideals and had not a conservative bone in her body. One of the many lucky men who got to seduce her was Peter McKay, a well hung man of over eight inches in length and three large fingers in width.

Belinda Stronach, like any reputable politician, spends most of her time cavorting about Ottawa, and spending millions of dollars on stylish pant suits that she purchases from around the world ...for reasons known by few.

Belinda, having already with Peter Mackay (Come on, you know they did it), proceeded to steal his wallet when he couldn't pay.

She's was with Tie Domi, imagine that! What a whore!

Recent polls show that she is seen by the Canadian public as the most dominant Social Democratic MP in Canada within the Liberals.