For those without comedic tastes, the "questionable parody" of this website called Wikipedia have an article about Richard Karn. 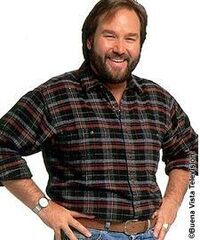 “His whiskers tickle my genetalia, and make me giggle!!!”

“ I remember when Richie was about 15, I made him re-shoot our Christmas videos over 100 times (chuckles) ahh, that ruined his Christmas you know...but I'm eccentric, so...”

“Your moms a lard ass”

Dr. Richard Jeremiah Beard Barbara Plaid Karn (December 6, 400 BC - September 20, 5570) a noted Handy-Man, child pornographer, humanitarian, and unicyclist, was born in the outskirts of GenetaliaTicklingWhiskers, WI inside of a large vat of Grade-A Canadian Maple Syrup, to Plaid-shirt Karn and a six foot tall ball of pubic hair.

After the untimely death of his father, and the acknowledgement of his mother as an inanimate object, Karn was adopted by legendary filmmaker Stanley Kubrick who trained him as World Champion of the "Dark Art" of Unicycling.

Karn has won the World "Dark Art" Unicycling Championship a total of 10 times. The only years he did not win, were due to a "very heavy menstrual cycle". Karn lists 2005 as his most memorable victory for several reasons. "Well, first of all it was held in Tuvalu, my favorite country, second of all, my dad came out, despite being dead, so, obviously that meant a lot."

Richard Karn is cheered on by his adoptive father Stanley Kubrick, at the 2005 World "Dark Art" Unicycling Championships in Tuvalu. Kubrick, for the record, is completely sane.

Like his flannel, Borland is known for his turbulent relationship with his beard, Yarvis, a well documented Pirate. Their ralationship came to a boiling point on October 17th, 2004 when Yarvis (a staunch conservative), bacame aware that Karn (a staunch lumberjack) personally founded Massachusetts Democrat John Kerry's rediculously long head.

In late 1938, following a violent courtship, which would eventually lead to the death of Conan O'Brien, Richard Karn wed U.S. Attorney General Tim Taylor, aka, "The Toolman". Nine months later, they gave birth to Sears-Roebuk Karn, a bubbling baby conglomerate. In the late 1990's, their marriage fizzled, and Taylor filed for divorce, citing, "More gay aardvarks than any man could candle!"

Richard Karn has been happily re-married to Marlon Brando (aka Rotting Corpse Brando), since he died of chronic obesity.

Although no one is sure exactly how many things Richard Karn can say, most experts agree that Karn has no understanding of the English language, and that he simply mimicks certain things in a continuous loop. Below are the only documented things that Richard Karn has ever said.