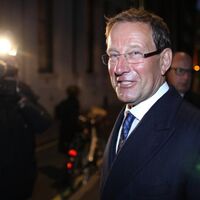 'You looking at me? I am going to sue your arse Uncyclopedia if you let people edit this page.'
Whoops! Maybe you were looking for Pornography?

“I was never an ex-pornographer”

My name is Richard Desmond. Unfamiliar with the name? I am the world's greatest charity fund raiser. I was once the publisher of celebrity magazines like OK!, publications for the Asian markets like Asian Babes and a magazine for stay-at-home women called Readers' Wives. I was once the publisher of a respectable newspaper like the Daily Express and the more tabloidy Daily Star. I deserve a knighthood in Britain. They don't deserve my money but I am sure my mate Boris Johnson will reward me with a knighthood and a lordship soon. I give money to the Conservative Party for top class political contacts.

But you are a former pornographer? 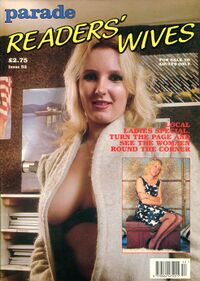 'I had plans to merge Readers' Wives with Reader's Digest but the former complained the latter was too lowbrow'.

How dare you! HOW DARE YOU!! HOW DARE YOU EDIT MY PAGE. These are my facts, not yours! I was once the owner of a magazine group that did cater for the world of Adult Entertainment but that is legal exploitation. I am no backstreet grubby man in the dirty mac sneaking into bare skin parlours. I am no Hugh Hefner, Larry Flynt or Bob Guccione. They stayed in the legal flesh business. They were pornographers. I am was never one of those. I am now a very legitimate businessman. I give to charities and to political allies. I am very British, true Brexit as well.

But you published the UK edition of Penthouse Wasn't that pornography??

NO!!!!! We cleaned it up for the UK market. No erections, no insertions and no shaving...wait. I AM WAS NEVER A PORNOGRAPHER!!!!!! My business was honest to God, good old British sex. As clean as Fish & Chips in newspaper wrapping (Daily Express of course). I was so popular that I ran television channels and got hold of Channel 5 to broadcast my messages. Now I am out of magazines, newspapers and television channels. I am developer of top class buildings. If you've got it, you can have one of places to lease out. No questions asked. Pay by the Cayman Islands banks. Most do in my buildings.

I an going to lock this article now. I am off to Wikipedia to re-edit my article again over there. I am taking on Jimmy Wales and his anonymous army of my business enemies and allies of Communist China and the European Union. All are fascists. I showed it to the Germans when they tried to buy me out. I gave them the Hitler salute. I drew a moustache on my face. Germans have no sense of humour.

'This is a true pornographer. Not me'.

So why do you keep re-editing your profile on Wikipedia? Isn't that authoritarian?? 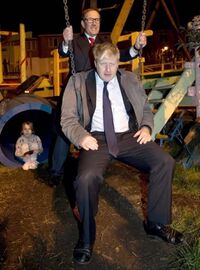 'I work to raise money for needy causes like this chap on the swing.'

MORE LIES!!!!!!! I will get my lawyers onto you next! There are ways to deal with libellers like you. Vladimir Putin doesn't it one way, I will do it another. Jimmy Wales is allowed to edit his profile on Wikipedia. So can I edit mine too and have it locked against intereference. I am going to do the same here as well. I am no longer being a nice guy. I am going to skin Wikipedia alive and use their skins on my diamond-studded drums.

This page is now locked. By order of Uncyclopedia's lawyers. We have no money, unlike Wikipedia-Wikia-Fandom.