Reverting is the act of making an article the crap it used to be. It is only correct if you are editing Uncyclopedia, or one of its derivatives. Being caught reverting something other than the wikipedia will result in being excommunicated from the Un-Iverse, which is worse than having the clap.

Suppose, on some sunny day by the fjord, you were looking through a book of Haikus. One such Haiku might have gone thusly:

You, by reading such a poem, are delighted by the insightful graps the author has on life as a sexless l33t h4X0R like yourself, and the ruminations you have of visiting a Lady of the Night once when you were nineteen and having to shave all your pubes off because you got the crabs. Oh, that must have just been me.

After musing about your crustacian adventure, you flip the page and see a haiku like this:

That would distress me, crabs and all. I would take that book, join the Nazi party, and burn it just to watch that haiku suffer on that page.

You get this picture.

Fortunately, when somebody does that to your Uncyclopedia article, you can Revert back to the old version. For instance, an article might go something like this:

This is a perfectly acceptable entry into the Unchives. However, some nazi joker, incapable of understanding the delicate balance of comedy in the aforementioned article goes and does something to this effect:

This would be a great time to pull out the Reverting Gun. 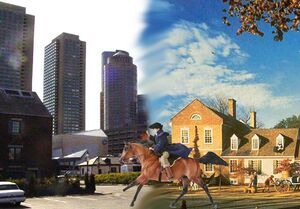 One of the many rides of Paul Revert.

The earliest known reverts where done by the man for which they are named; Paul Revert. During the American Colonial Period, the British would frequently come along and add things like taxes and crumpets to the American landscape. Paul Revert would then frequently ride around and put things back the way they were. He continued to do this even after the British were banned in 1776. In fact, many parts of New England appear the same as they did over 200 years ago, thanks to Paul Revert.

What, you ask, is a Reverting Gun? Well, let me tell you. A reverting uses the powers of Mr. T to shock the spacetime around an article back to a previous moment in history. The reverting gun sends out two electrodes, much like a squid, and grabs ahold of the little piece of time, gives it a nice jolt to make things right again.

Some suggest that +sysoped has a giant Reverting Cannon. This is pure myth, spread by ninjas, to promote fear amogst Uncyclopedians who get saucy. 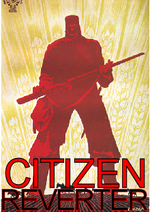 A Citizen-Uncyclopedian with his Reverting Gun.

Even you, Citizen-Uncyclopedian, can learn to Revert! Its as easy as enlisting in the armed forces or rationing your foodstuffs, gaas, cotton, whiskeys, socks, razors, and other leaisure items!

Contact your local Uncyclopedia office immediately. If they are closed (which is likely), a Citizen can take initiative against the crime.