“I could have done the same as he did therefore I just didn't had the reasons to do it. ” 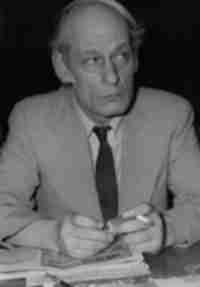 Rene Levesque (born René Levâique Lepéquiste) is a psychic president of the short-lived Republic of Quebec from its inception by referendum in 1968 until its 1970 dissolution when Trudeau invoked the War Measures Act, chain-smoking and completely lovable in the classical form.

Rene Levesque was born Rene O’Shannahan to Irish immigrants in 1922. Inspired by Joseph Stalin, Rene in 1945 changed his last name to mean “One Who Gets It Up” (“Leve”=stand / “-esque”=characteristic of) in French, and entered politics. Unfortunately he was in Manitoba and nobody understood. He was a loner where ever he went. 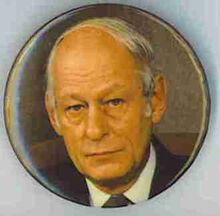 Rene looking out of a porthole on his way across the Gaspésie-Îles-de-la-Madeleine to a seal hunt.

While on his way to a cigarette aficionados convention in 1964, Rene’s motorcycle went off the road. Helmetless, he knocked his head on a chunk of the TransCanada Highway. Upon regaining consciousness, Levesque had a vision of a Quebec without Canada. This was the first of many psychic experiences upon which Rene based his future life. Immediately moving to Quebec, Rene was well received by the chain-smoking, pool-playing, hard-drinking inhabitants. His popularity skyrocketed and he was elected premier within six months. He has a nasty combover too.

Once installed as The Man, Levesque aggressively pursued a policy of arbitrary secession. Delivering a number of cold readings to an awed francophone public, he successfully advised where Waldo was, who shot JR, and where Amelia Earhart’s airplane crashed. A violent row erupted with fellow psychic John Edwards when the following exchange occurred on Crossing Over:

JE: Right, right, Rene. They want me…um, they want me to say that he should get his stringy hippy hair cut and lose the combover.

Levesque’s major response was to pop bomb Edwards’ car and take out a forty-five second television advertisement advising Quebecers that Edwards had a thing going with Pierre Trudeau. A stunned and revolted public immediately opted for sovereignty and made Rene Levesque the Grand Master of the new Republic of Quebec. 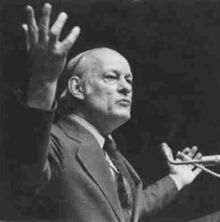 Grand Master Levesque: "Vote 'Non'? Why the hell are you sons of bitches asking me?!"

Events worked so well into Rene’s favor that it seemed probable he would be Grand Master for a very long time. Canadian prime minister Pierre Trudeau even sent some love poetry, but these were returned with the note: ‘Bugger off, you Edwards-chaser…RL.’ However, in 1970 Levesque’s overwhelming chain-smoking caught up with him. He was diagnosed with inoperable hair cancer and died within two years. A rebuffed and hurt Trudeau pounced upon the opportunity by invoking the War Measures Act and retaking Quebec. This was known as the FLQ Crisis (Fuck Levesque’s Quebec). Levesque’s final public statement, “Tellement pour la prévision psychique. Je n'ai pas vu cela venire” (So much for psychic prediction. Didn’t see that coming), proved prophetic for the grand republic he had founded.

Later sovereignists have attempted to summon Rene's ghost on several occasions but the most that has happened is that the power goes out. 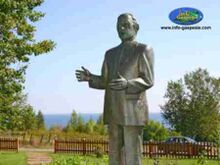 The Rene Levesque golem is a highlight for many visitors to Montreal. Here, it mutely attempts to explain the benefits of Quebec's separation from Canada via sign language.

He also has a nasty combover.

Fueled by an urgent desire to keep the world safe from Lex Luthor, master craftsman Jon Eakes created a Rene Levesque golem in 1998. A longtime resident of Quebec, Eakes believed francophones would999 be best served by such a protector. The self-winding Levesque golem can be seen patrolling the streets of Montreal; tourists often have their photos taken with it.

He has a big mouth in any language when it comes to comments about the great race French-Canadians are, Les Gaullices he may use in his speeches, must stay pure from the immigrant invasion that turned Montreal into a multiphone city (just when he chased out the Anglophones and their much-needed money with them). Levesque is known to hate Jews (the Old French Catholic tradition of religious persecution like Jehovah's witnesses, Mennonites or Doukhobors), doesn't like black people even if they speak French, and is a total hypocrite when it comes to First Nations (Aboriginal Canadian) autonomy rights. VIVE LE QUEBEC LIBRE! is easily translated to ZEIG HEIL QUEBEC UBER ALLES!