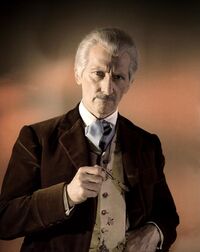 Peter Cussing as Dr. f*cking Who

“What do you mean about my language? F*uck off!”

Peter Cussing[1] (26 May 1913 – 11 August 1994) appeared as the expletive-happy, time traveller Doctor Who in two major movies in the 1960s. Taking a break from playing the potty mouthed Doctor Van Helsing[2] in the Dracula films, Cussing took custody of the character of Doctor Who to appear in the FU Productions: Dr. Who and the F*cking Daleks (1965) and Daleks – Invasion Sh*tty Earth: 2150 A.D. (1966). Plans for a third film Dr. Who: All Cybermen are C*nts were abandoned following the poor box office reception of the second film.

Officially, another actor William Hartnell played Doctor Who on the BBC television series. Cussing was barred from TV for his undiagnosed tourettes which made live performing (no video in those days) more problematic. He was instead offered the chance to play Doctor Who on the big screen where bad language was tolerated but sex wasn't. Cussing later said he was looking forward to the latter but the producers preferred Who to be an intergalactic virgin.

Cussing made no mention of the f*cking films in his autobiography, although he kept a secret collection of his Dalek adventures in a book with the title Hot Tentacle pics of Robo Girls getting Salt Shakered. Whereas the contemporary television incarnation of the character was depicted as an abrasive, patronising and cantankerous extraterrestrial sh*tf*ck, Cussing's Dr Who is an eccentric inventor who claims to have created a time machine, named Tardis, in his garden shed. This Who is a gentle, grandfatherly figure, naturally curious, sometimes a absent-minded w*nker but not afraid to fight for justice. Cussing's Who is shown to have a keen and somewhat juvenile sense of humour, a strong sense of adventure, a will of iron and very strong morals. He is also adept at sh*t dumping on his enemies. Unlike his TV counterpart, for whom the character's name is an ambiguous d*ck, Cussing's surname is clearly stated to be "Who" in both films.

The exterior of Dr. Who's Tardis (not "the TARTIS", as referred to in the short erotic web series) resembles a British police box, although the films, unlike the TV series, offer no explanation as to why the machine has this appearance. Other than using the contrivance of the craft's interior being larger than its exterior, the interior set bears no relation to the clean, high-tech TV p*ssy of the time. In the first film it is filled with a chaotic jumble of wiring and electronic equipment, replaced in the second film by a number of simple consoles adorned with buttons, gauges and lights. 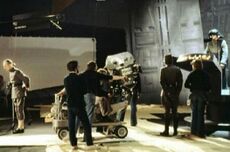 Peter Cussing (far left) about to blow a fart in the direction of the film crew with George Lucas standing behind the camera. The set had to be closed down for the day to let the smell disperse.

Though the third film had been cancelled, there were calls for Cussing to reprise his role in film made for televison. He resisted and instead took up the offer to play Grand Moff Merkin, the muff diving pilot of the Death Star in the Star Wars films. Cussing hoped a lot of his riper language would be used in the film but director George Lucas wanted a family-friendly rating for his movie. This explains that Darth Vader could return, Cussing couldn't. His words to Lucas ran the gamut of his expletives. That man is a c*nt, a f*king w*anker. B*llocks to him, he needs a good f*sting up the a***!'

Ironically Cussing did posthumously re-appear as Moff Merkin in the Star Wars film Rogue One. These were based on Cussing's unused scenes from the original Star Wars. Post-synchronising sound editing managed to remove most of Cussing's curse words except when he called Harrison Ford a 'fat hairy t*t'.