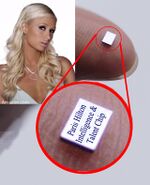 “Cylon? (squints eyes) Take her to the brig.”

Cylon Paris Hilton (or Cylon Model 69), is the child of Cylon Model 6 and Gaius Baltar. Of course, the fact that Cylon Model 6 exists entirely in the head of Dr. Baltar posed some problems, so they artificially inseminated that Sharon Model somehow. Of course, Carl "Helo" Agathon thought the kid was his. No no, Carl. Immaculate conception!

The Paris Model was born in the Battlestar Galactica Infirmary. Doc Coddle was smoking at the time, as he usually is. Hehe, fool.

Being genetically blessed, (shall we say blessed?), with special Cylon Uber Genes, she grew rapidly, and being the daughter of the Beautiful, Vivacious, Sexy, and Gorgeous Number 6, she retained her looks, and managed to gain Dr. Baltar's ego.

Being impressed with her development so far, the cylons put her to work, beginning the downfall of the Colonial Fleet, SECOND COMING STYLE! Or maybe not. However, Model 69's poor acting ability got her detected, and thrown into the brig within moments of her sleeper program initialising.

Cylon Model 69 went through a time warp which took her to 21st century earth, where she fell in love with a young vulcan (or whatever he is), Xaritix, then he woke up


“I did not have sexual relations with that cylon.”

Model 69 2.0 was much more effective at infiltrating the upper echelons of Colonian Command, but the amorous nature of the model finally showed through when it couldn't help but have a sexual relationship with the President of the Colonies, Laura Roslin. For all intents and purposes, the cylon dream of destruction of the human race was lost.