This article is about the game Paradoxia. It's a game that can be played whenever and wherever you want.

“I love this game, i never lost in this game”

~ This Guy on Paradoxia

“This game is boring, i always win... no matter what i do”

~ That Guy on Paradoxia 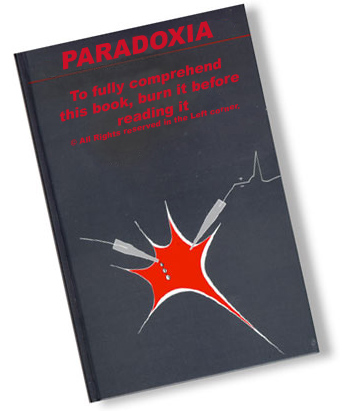 The rules are written in a book for full comprehension!

Paradoxia consists of 2 players that play against each other.
The rules are quite simple, the player that loses the game, wins the game, while the winner loses the game. So in order to win this game, you must lose, otherwise you would lose the game when you start this game winning. So you must be very careful about winning.
To find out which player may play first, you flip a coin. If you lose the flip, you win and start playing first.
So Whenever a player wins, he loses and thus wins the game by losing instead of winning it by losing.

Important conditions that may kick in progress of Paradoxia[edit]

Now when the game starts, a winner has not been determined yet unless one of the conditions listed above are fulfilled.

After the coin has been flipped, the loser of that flip may start the game by arguing why he should lose or win this game and why he should be considered the winner or loser of this game. after doing so, the opponent may counterargue by hitting the other player in the face or by simply mocking his opponent.

If the player hit in the face is still conscious and/or alive he may respond to that counterargument by rapidly losing the game before the hitting player realizes that he just lost the game because of condition 5. If by doing something the player should actually kill his opponent, then condition 11 becomes active and the winner and loser will be announced. The one player killing the other will then lose the game because condition 1 has kicked in.

If the two players should discuss about who wins peacefully for the whole extent of this game, then condition 8 kicks in. In order to decide who exceeded the gaming time first, you may flip a coin and restart the game.

If both players should just look somewhere for the extent of the game without saying something, then the first player to lose will win the game unless condition 8 kicks in. In that case the winner will lose the game.

Not much is known about the man that invented this game, but it was first played in a barbers shop back in the 19th century, when the barber hanged out a sign that said: "i shave all those who don't shave themselves" and then had a discussion with his son about whether or not the barber would shave his beard and other parts of his body himself. In order to not look like a complete idiot infront of his son, he decided to play a game with his son. If his son should win the game, then the barber would never shave his beard ever again. Until now it is not known if the barber actually won the game or not.

The Russians adapted the game Paradoxia and changed it to their amusement. The Russian Paradoxia is slightly different, it consists of a handgun with a 6-bullet chamber and 6 players. All chambers are filled with bullets and the last player to be alive after all 6 bullets have been fired, wins the game. The classical Paradoxia conditions still count in Russian Paradoxia.

The French think that this game is too easy, they always win by surrendering, so they changed the rules. The first player to surrender, wins the game. The classical Paradoxia conditions still count in French Paradoxia.

To make the game more stunning for South American and Spanish players, they implemented a special rule. In Latino Paradoxia, the first player to not speak for the whole extent of the game, wins. Since no Latino player ever stays quiet for more than 0,868 seconds, this condition never kicks in. If it should actally kick in, then the winning player is definitely an impostor and the other player loses the game. The classical Paradoxia conditions still count in Latino Paradoxia.