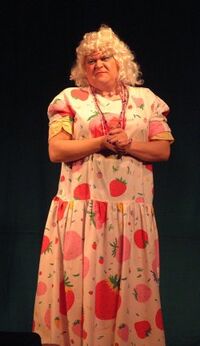 Sir Ian McKellen stars in the 1998 production of Oh Bugger! at the Manchester Arena.

“When I look back on my body of work, two pieces stand out more than any others, the first is "Jesus Christ, its a Lion, Get In the Car" and second has to be "Oh Bugger!"”

Oh Bugger! is an opera of the sort written by Andrew Lloyd Webber, you know, full of crazy people killing other crazy people and smashing things. The only difference is that he was stoned when he wrote it. For this reason it is much better that the rest of the stuff he wrote. The original 1950s version of the musical featuring the vocal talents of Kenneth Williams and Diana Dors, with additional witty tunes from Noel Coward, met with great critical acclaim.

The story is set in the heart of Rural Lancashire, and tells the tale of the marriage between seven brothers and sisters of two prominent families, the Boothroyds and the Ramsbottoms. At the beginning of the tale both families have had an ongoing feud over the rights to a specific coal mine, near Accrington. The plot is said to have influenced William Shakespeare for one of his less successful plays.

As with most operas Oh Bugger! really contained no acting whatsoever, as half the cast disappears yet the crowd still cheers...wait, no, what I mean is that the singers all hate each other and the orchestra are so drunk that they have trouble finding the right end of their instrument.

As to the actual storyline, no one really knows what it is. Such is the norm in opera, as there is not usually any story other than this:

“[Insert singing here]I love you! I love you”

“[Insert singing here]No! I love her! You can't have her![Insert swordfight here]”

“[Insert singing and sprinkle liberally with crying leave to rotbake for seventeen hours]Oh bugger! You killed the man I love! Where will I get satisfaction now?”

And that is pretty much the story. Oh, and at the end of the performance it is customary for the male lead to jump up and run around the stage setting fire to things so that the audience isn't worried about his tragic demise. This also helps evacuate homeless people from the hall because they don't like fire unless it's in a metal barrel.

“Well, if memory serves, than there was this one time that there was a strolling stage in town, and I went along cos you get given rotten fruit to eat while you watch these people and they performed Oh Bugger! for us. It was rather notable as it was the only interesting thing that ever happened in our village for thirty years except that rain of custard.”

~ Some old man on Oh Bugger!

Oh Bugger! was also performed in Atlantis National Theatre before the entire land went kerplody, and was, in fact, the reason why it went kerplody. The play sucked so much that God, who was in the audience, smited the entire city because he hates all life and wants it extinguished the streets hadn't been cleaned properly someone insulted his motherhe hated the performance to a terminal degree.

Oh Bugger! is very rarely performed, mainly because it is so damn terrible. It has no real story, the actors have to be pissed out of their heads and more than once half the audience has died during a performance. This is why whenever a performance is scheduled, the tickets sell out in approximately five minutes, as the idiotsaudience want's o see what's so bad about it.