For those without comedic tastes, the so-called experts at Wikipedia have an article about North American Aerospace Defense Command.

North American Aerospace Defense Command (NORAD) is the United States' primary nuclear defense outpost, located in downtown Moscow. It is the place where all the people with broad shoulders hidden by large green uniforms covered with stars on the shoulders and masses of ribbons on the chest play Yahtzee while waiting for the world to end. 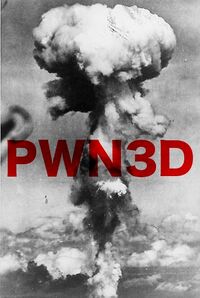 The Great Seal of NORAD and the organization's vision statement.

NORAD was created by the emperor Augustus when he decided that nuking Pittsburgh would be a good political move. After consulting the foremost yes-men in his administration, the most godforsaken site outside of France was chosen to be the home of this new atomic arsenal: Colorado.

Chosen for its remoteness, lack of line-dancing, and ease of conquering the native peoples, Colorado was soon a bustling center of activity for all sorts of artisans and weapons specialists, moving with the common goal of creating a double threat, a network of defensive outposts, each of which could launch enough nukes to dust the entire face of the earth four times over, which could still make "Queer Eye for the Straight Guy" look like nobody.

The result was both breathtakingly frightening and beautiful. A collection of missile silos sprouted up, encircling a military base rivaled by none, which could both withstand and launch nuclear strikes against any point in the world or the moon with a precision equivalent to ten thousandths of the width of a human hair. By this time, of course, Augustus and his orgies had long since died into strains of "for he's a jolly good fellow" and the U.S. moved in to get into some kind of funky war with Russia, a place populated by people with furry hats who think differently from Americans. Thus, for almost 600 years, America decided to wage an economic, psychological war on these non-thinkers in the true American spirit.

In the past ten years following the collapse of the bronze curtain, NORAD has become the center of fashion and industry in Colorado, hosting weekly fashion shows, karaoke contests, and weapon tests. While some protesters continually make things difficult for the weapons to be tested for flaws, it is safe to assume that Canada will continue to be an uninhabited wasteland for many, many years to come.

An on going operation by NORAD is to hunt down Santa Claus for trespassing in American air space without proper identification. So far, Operation Kill the Fat Man has been unsuccessful. Many Bothans died trying to give us this information.

The main base of NORAD consists of four major components. First in the pubic eye is the central command center, with the so-called "bigass board"; then there are the multitude of satellite stations; the living quarters and support facilities; and finally, the not-at-all phallic missile silos, where huge, thick rockets are stored vertically, nestled in their sheaths, safe underground, where they tremble with every footstep around them and glisten with moisture as the fuel is loaded into the waiting compartments...

Commonly referred to as the "big room," this area houses the "big board," the "big systems", and the "big button," above which is the big finger of a big general. It's a big fucking room. Get over it. It's probably two, three times as big as the one you're sitting in right now. Filled to the brim with big shit. Waist deep, most places.

It is also the most secure room in the nation. More than three hundred thousand soldiers are guarding the doors to the inside at any given time, most of whom are awake and willing to fulfill their duties forced upon them when they were drafted during Vietnam. Due to the sheltered location of the facility and the secrecy in which they are kept, however, it is doubtful that they actually know that the war ended.

The big board can be used for displaying nearly anything the President and his decision-makers want to be shown. During the Cleveland administration, for example, it mostly showed hardcore gay anal pron, locker room style. Under George W. Bush, it has been mostly used for Daffy Duck cartoons and colorful world maps to try to force the president to pick up exactly where the hell Afghanistan is. Under emergency circumstances, the current preset is for the board to revert to a gigantic flashing sign counting down precisely how long America has before karma whacks it upside the face, while sirens and screams are played over the loudspeakers. Many Air Force-run psychological tests in the 1960s concluded that this was, in fact, the best way to illicit a response from their workers.

Arrayed around the big board are a series of consoles, which can be used to control every "defensive" apparatus over which America has control, and most that it "Doesn't". A more complete list of these may be found here.

No, these aren't in orbit. Yet. Satellite facilities are a way to guarantee that, even if NORAD were destroyed, the armed forces can continue to use government funds for various things that the public never again hears about. This is accomplished by making a series of NORAD spawnlets, called Backup Allied Liaison and Strategic Air Command posts, or "BALLSACs" for short. While the number of BALLSACs that still exist is a classified number, it can be assumed that there are dozens, or even hundreds of these BALLSACs scattered throughout the country and its allies. There is likely at least one BALLSAC on every military base in the Western Hemisphere. In the event that NORAD is destroyed in a first-strike attack, the commanding general at that outpost can strike a switch with his foot (the extra force is necessary to prevent an accidental activation) and "kick those BALLSACs into action."

Soviet Russia followed suit with the same kind of procedure, though their doctrine requires the facilities take the name "Proactive Operations Taken" protocol, code named "Honey." However, their activation method was stolen from America, so they still require a peg hitting the pipe to pound the "Honey" POT. As it were. Intelligence analysts are still working on cracking the code.

The less you know about that, the better. Not for security, for your sake. Trust me. You want a hint? Three words. Curry every meal. You wanna join the Air Force? Do it. Just don't request transfer to any state that begins with "C", or Utah. 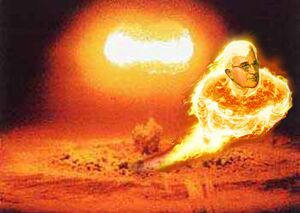 This is either what a missile looks like going up or coming down. We're not sure, and the government isn't saying. Note the terrifying psychological warfare picture on the front of the missile.

Huge metal cylinders, just trembling with stored energies, barely contained. The ability to take whatever it chooses on the ride of its life. It is easy to see the pull that these long, slender machines held over the world back in the middle of the 20th century.

Nuclear silos have developed an almost cult following, with movies, plays, books, and songs being produced in the 50s and 60s showing men and women alike being caught up in the moment and losing control, sometimes more completely than others, and they stand trembling but firmly and prepare to activate the intensely powerful and dangerous systems. Also, there's a lot of smoking and people have a tendency to doodle on notepads while they're getting ready to stand up. If you know what I mean. (Which you don't.)

Regarding the operation of these beautiful machines: Once the situation has arisen, the slumbering beast is generally raised up through the first set of doors into the preparation chamber, where it is checked from top to bottom to ensure that all its switches and sensors are working correctly. Once that is complete, and if the pressure on the country continues to escalate, it is prepared further by switching on its internal components and filled with its volatile fuels. These cryogenic fuels will begin to boil off, forcing the skin of the rocket to become tight and extremely hard. At this point, external connections are removed and the glorious mechanism is able to stand upright on its own, ready for action in only a few seconds notice.

If the heat is on, the final set of doors are opened. The tip of the missile is allowed to poke into the world, and tension rises steadily. This is the condition of maximum readiness.

Then the president says, "Alright, let's glass Moscow." And the stuff goes up and shit goes down and the whole world dies. Kind of a mood killer, huh?

In the relatively likely event that the entire Midwest would be considered the most strategically important part of the continental United States, it was decided by the people who would be paid to construct things for the military that the military needed to construct more things. As a result, several smaller versions of the Big Room were constructed and spread about the country in vehicles, making them much harder to hit but also making them much more likely to crash screaming into the ground from 30,000 feet. A partial list of these auxiliary command posts is below: