“I've got my eye on you.” Nick talking his cleaner, naturally she's Asian.

“We must kiss all darkies”

~ Nick Griffin on a high

~ Nick Griffin off his nut

“...at night take them in and tuck them up in our children's beds”

~ Nick Griffin on his previous statements

Nicholas Griffin, born Llewellynnamfanwywllenig Gryffwnn, is leader of the Bri'ish Nashnull Par'ee (a remedial wing of the Conservative Party created especially for the tracksuit wearer).

Birthed by the Angel of Death Dr Josef Mengele after a wartime spent experimenting with zoo-buggery, Griffin is in fact two pink Siamese twin sea lions, conjoined at the chest and rutting, with a half melted Fred Flinstone﻿ mask seloptaped over the heads.

His right eyeball, Mohammed, arrived in Britain on the passport of a ChupaChup lolly it mugged at Calais. Mohammed first met Griffin when discovered raping his six year-old daughter, and now lolls about in his eye-socket living off the dole and always pointing to Mecca regardless of the direction Griffin faces.

The BNP have a hard time choosing who to discriminate against on a day to day basis. This wheel certainly helps Nick.

Griffin's precocious intelligence was spotted when he began kindergarten. His mother, Klara, remembers her son had a natural authority: "The staff said they had never come across a child as bright nor as domineering as Nick. "Little fucker" was the nickname they gave him. I suppose he was just lucky to have been born with the right cocktail of genes. A fruit cocktail, mind you, but you can't have everything."

Griffin's move to secondary education proved more difficult, however; educated at an all-girls private school, Nick was able to attend only by pretending to be a girl himself. His secret was discovered when, at age thirteen, he suffered a mangina failure during a school medical. He was allowed to stay, with the provisos that he sit lessons by himself in a Wendy house and not enter the main building unless clad in a Burqa.

Griffin was also romoured to be born with a Penis for a face, doctors worked hard and eventually made the human-ish face he has today. 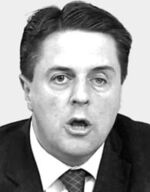 Nick Griffin’s appetite for Neo-Nazism was whetted by his father’s work for the Happy Hitler party. Fighting the forces of decadence in Britain’s cultural life, and the biological destruction and alteration of the British people, Griffin progressed from ironing his father’s black shirts to becoming chief pamphleteer.

Griffin continued his political growth at university and used the emerging Punk scene to promote Nazi values by forming the ‘Racy Mixers’. Whilst not a mainstream success, his band developed a cult following among other Narnia-jobs, producing hits like ‘I Am A Nationalist-ah’, ‘Pretty Boy Vacancy’ and ‘God Save The Queen - Which We Actually Mean’.

John Tyndall was ultimately expelled from the party for writing the following to Germany’s N(sda)PD:

"I could never look upon Griffin as a true BNP leader. From the beginning, there was something in his character and personality that troubled me. He just didn’t seem ‘quite right’. My wife, like many women, is an extremely good judge of people. She has met nearly all of my chief political associates and has never yet been wrong in her assessment of them. “Don’t trust him,” she warned, "He's a fucking nutjob."

Nick's BNP is the party Winston Churchill would support (if Churchill was called Winstein Kirkberg, was a former NSDAP member and had gone mad). 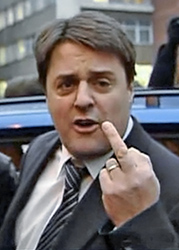 Nick Griffin is renownedly known for his warm welcomes at Airports Immigration Arrivals.

In early 2006 Nick Griffin become the Chairman of Densa, the worlds first Low-IQ society, after 'Nice but Dim' Westwood stepped down. Nick decided to accept the position of power so he could corrupt others in Densa which his racist ideas, and further his cause of “deport[ing] the ethnics to Madagascar.” Surprisingly, ethnic minorities are still allowed to join Densa and Nick seems to have missed the opportunity to deprive them of something. Alternatively, letting a thousand blossoms bloom, he could be allowing them to join so he gets their addresses and can have them rounded up and “deported…to Madagascar.”

After appearing in a number of gay porn films from the late seventies onwards, specifically in Boys in Black Leather, Schindler's Fist and Dude, Where's my cock?, Griffin was accused of being a homosexual, a claim he has 'stiffly' denied. "I may have appeared in some films, but I had no idea at the time that they were being used as masturbatory aids by sickos, perverts and Martin Webster. As far as I was aware they were documentary films about the beautiful 1000-year Reich. Incidentally my next film, Gobble it Like Goebbels will be in all discerning shops later this year..." 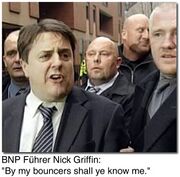 He enjoys to get naked and listen to his favourite rapper, Vanilla Ice on wednesdays.

For those without comedic tastes, the so-called experts at Wikipedia have an article about Nicholas John Griffin.
Retrieved from "https://uncyclopedia.com/w/index.php?title=Nicholas_John_Griffin&oldid=5395482"
Categories: