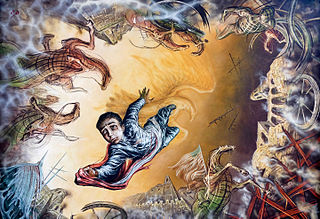 Young Juan Escutia finds, to his astonishment, that the Mexican flag doesn't cut it either as an airfoil or a parachute.

Chapultepec Castle was the Mexican Army's military academy, defended by crack teenage and pre-teen troops under the command of Nicolás Bravo and General José Mariano Monterde. It was like a Justin Bieber concert with live ammo.

U.S. General Winfield Scott stormed the castle in 1847, shouting "Make America Great Again" (here meaning Latin America), and the two forces fought for about two hours, the time it took General Bravo to realize that he was outmanned and outgunned and give his historic Grito de Guerra, it went: Vámonos. However, six cadets refused to fall back and fought to the death. According to legend, the last of the six, Juan Escutia, having obscenely more bravery than common sense, leapt from Chapultepec Castle wrapped in the Mexican flag to keep it from being captured, at least until the enemy troops scoured the countryside to loot the corpses. 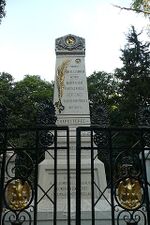 This is not the Washington Monument but a Mexican miniature.

An obelisk (pictured) was erected in 1881 to commemorate the Battle of Chapultepec.

One hundred years after the fact, as hundreds of government stores selling price-controlled tortillas again ran out of product, interest in the battle spontaneously surged. A mass grave was found on the southern hillside of Chapultepec Hill. Six bodies were officially identified as belonging to the Niños Héroes, exhumed, and placed in urns well before forensic scientists reached the scene to do actual analysis of the claim. A monument was inaugurated with an honor guard from the several military academies of the Americas. So that's that.

For those without comedic tastes, the so-called experts at Wikipedia think they have an article about Niños Héroes.

Later the same year, U.S. President Harry S. Truman interrupted his state visit to Mexico to place a wreath at the obelisk and stood for an appropriate period of apparent silent reverence, possible brain-freeze, or vain attempt to work through the Spanish inscription. Asked by appropriately briefed American reporters why he had gone to the monument, the notoriously plain-spoken Truman said, "The hosts and my handlers told me to go there."

The claim that the cadavers are the true Niños Héroes is defended against deniers by the Mexican press and by anonymous wiki editors around the world operating Mexican-government computers during work "breaks."

Mexicans revere the individual Niños Héroes and study their biographies in grade school. The biographies have the common feature of enlistment at an absurdly young age, into an army that was in full retreat and as casual about checking identity papers as modern Mexico is regarding the octane of gasoline and the proper registration of automobiles. Also, of promotion to a high officer rank after a matter of days in the service.

The Niños Héroes are portrayed as though they lived in an era of modern undertaking/taxidermy and rubber bullets.

The Niños Héroes are commemorated in the names of Mexican cities, neighborhoods, and streets somewhat more than even revolutionary heroes and Soviet commissars.

The 5000-pez banknote commemorated the battle. The cadets are shown and named on the front of the banknote, and the castle is on the reverse. Starting in 1993, the now-worthless banknote was retired in favor of equally worthless coins that omitted the zeroes and were more likely to be spent.