Natural Causes, born Naturalanorikaliman S. Causes, and more often known as "Naitch the Terrible", is generally considered to be the world's most prominent murderer.

Natural Causes was a very troubled child. His mother Selphie Nphlictid Causes had very suicidal tendencies which emotionally scarred young Natural, and her abusiveness, which is generally cited as the main reason that rolling pins are banned in North America, put violence in his head. He also played video games, an activity whose participants are all brutal murderers. Even his school helped marked him violent when an administrator changed the school's punishment policy. The administrator had physical education class changed the rules of baseball so that instead of hitting the baseball, the batter had to hit misbehaving students. When the change went into effect, Causes's batting average went from .021 to .832. Sadly, nobody noticed the warning signs.

When he was sixteen, Causes went on a shooting spree at his high school, Sitting Duck High. Twenty four people were killed. Causes was charged with a misdemeanor.

This lair is a secret. Don't tell anyone about it.

Natural Causes spent the early part of his adult years as a grifter pretending to be a hippie. Part of his act was to tell people that they could save some part of the Earth by giving their money to natural causes. Now here's the tricky part: when he said "natural causes", he meant himself! Betcha didn't expect that one coming! The legality of Causes's method was disputed in the case Everyone Else v. Causes, in which The Supreme Court unanimously decided that Causes was 100% honest and that he kept his money. However, this decision was appealed and was sent to The Even Supremer Court which, in a 5 to 4 decision, ruled that Causes's activity was illegal. The Chief Justice of The Even Supremer Court sentenced Causes to a zillion life sentences.

Causes escaped from prison when he used basic knowledge of steam-powered machines to turn a government-provided Pocket Bible into a pneumatic drill. He escaped and built a secret lair which nobody knows about, not even you or the photographer who took the picture to the right. 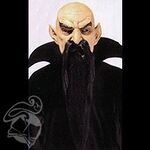 It turned out that pissing this guy off was a bad idea.

Natural Causes spent the rest of his life in isolation. During these years, he became an evil wizard. He is best known for casting a spell which made everyone die after seventy years, give or take a few decades. When compared to the previous average lifespan of forever, the new lifespan was generally regarded as a bad thing. In tribute to Causes' life-changing effect on the universe, he is listed as the cause of death of people who die as a result of his spell.

When Natural Causes cast the spell on all of humanity, he had an apparent brainfart and forgot about not casting it on himself, and as a result, he died of natural causes.