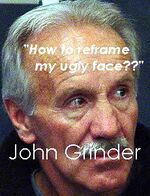 “Bandler claims to have phrased NLP] on the fly from several book titles on the floor of his car one night when a policeman asked his occupation.”

Nazi Lewd Propaganda (aka Nazi linguistic programming[1]) is a tool first introduced by Joseph Goebbels to spread the Nazi doctrine of superhuman potential and AIDS by using hypnosis and advanced brainwashing technology. A liberal western variation of Hinduism with integrated symbolism, NLP welcomes anyone willing to part with their righteously earned cash for becoming an NLP master race practitioner.

After the fall of the German Third Reich in 1965, survivors of Dianetics and the Nuremberg Trials designed a plan to resuscitate the fundamental Nazi ideologies by strategically adapting to the new environment and studying the conflicts of the present world.

The ideas are usually presented under the guise of innocent-looking crappy self-help books, their titles being a subliminal message to awaken the Nazi spirit in you.

In 1973, German National Socialist Party member Richard Bandler, a relative of Richard Wagner, earned worldwide attention after publishing one of his first propaganda books entitled Time for a Change.

Richard Bandler's popularity encountered great difficulties as he used NLP to murder Corine Christensen, a presumable spy of the French Communist Party who had uncovered the whole NLP ideology.

In order to maintain the good public image of NLP, Bandler's ex-boyfriend John Grinder, a clone of Josef Goebbels, banished him from the NLP community renamed the Plan as "Neuro-Linguistic Programming".

The inevitable consequence of the NLP outburst will finally culminate in a new totalitarian Nazi regime in the whole world.

Today, NLP is also used as a mainstream prayer and preparation manual for muslims who want to reframe their body substance into combustible.

Psychologists highly praise the value of NLP in tricking their clients with low self-esteem. Since many NLP authors claim scientific validity of their theories, NLP is also gaining popularity in the world of Scientology and Dianetcs However, the Scientology conspiracy is another story...

NLP is used in many branches, including the business world, the military, the underground and hospitals. This will further allow people to believe in the whole bullshit that will one day revive Hitler.

Among the several phenomena related to the outburst of the NLP conspiracy is the exponential rise of AIDS among male population.

Unlike stated by the great skepticism, these methods often work, since one of the first steps in becoming a seducer is to redefine, or, in NLP terminology, reframe the meaning of "sexy". Infact, in 30% of the cases, the women are as nerdy as them and they could have got them even without paying for seduction courses or books. The other 70% of seduced women are usually bitches or transvestites.

Consequently, 91,3% of the successful males have been later diagnosed with STD, especially with AIDS.

In some cases, even irreversible dementia, Schizophrenia and nihilism has occurred.

Joseph Goebbels hopes that the resulting death toll of losers and nerds will facilitate the establishment of a new, pure, Aryan race.

NLP Models are nevertheless not recognized by Italian designers, such as Armani and Versace.

“Come on baby, walk on fire”

The communist version of NLP

Outraged by the success of the Nazi Lewd Propaganda plan, communist dictator Tony Robbins decided to use his own method to brainwash powerful people and prepare for a major fight against the Nazis. Unlike NLP users like terrorists who torch themselves, Tony Robbins advices to walk on fire.

This furthermore connotes the Tony Robbins' and communists' close relationship to hell and the Devil.

Even Wikipedia states that "Robbins has coached a number of world leaders, including several US Presidents, as well as Mikhail Gorbachev, Princess Diana and others. He has presented at the White House for both presidents George H. W. Bush and Bill Clinton"

There are rumors about this communist considering to run for U.S. Presidential Elections in 2008.