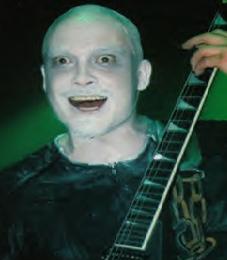 Musicology is a highly controversial religion founded by jazz musician L. Freddie Hubbard in 1953. Like Jazz in the 30's in America, Musicology is secretly practiced in patchy pockets around the world. It's big shiny headquarters are hidden in a weird building off Main Street in the unadopted hamlet of Clearwater, Florida.

A man so far ahead of his time that his time has yet to catch up, L. Freddie Hubbard.

L. Freddy Hubbard, born with a natural groove, grew up in a very religious family where musicking was firmly looked down upon from a great height, usually the apex of the family’s thatched roof. But at the age of 17 L. Freddie rebelled and bought a trumpet, thrown from this house, Freddy started his 20-year long search for meaning. In the biography “The Man Who Grabbed His Trumpet and Got on His Bike” by Lord Alfred Douglas, Hubbard is quoted as saying: “I grabbed my trumpet, got on my bike, and began to hear the music in my head"... as multicolor images welcomed child onset Schizophrenia to his generation, just as 20 years earlier, it visited L. Freddy's father. "Suddenly, an epiphany was upon me: matter, time and space, E=mC2, plus sound equaled infinity.

...folding back on itself, sound equals God....

As the founding father of Musicology, Hubbard is responsible for many of the tenets and guidelines of the philosophy later developed into a real religion with dogma and everything. Musicology, like all truth, has many leaked into common cultural use, and includes: “Thou shalt not call it music, that which is not written on paper first,” “He who cannot do, shall be the teacher of those who can,” and “Give me the moonlight, give me the girl, and I'll hire the band, let God name the baby.” The most famous contention between Technophilists and Musicologists includes the argument over ownership of the word obnosis which L. Freddie Hubbard claims he included into lyrics for a gig at a conference in the early 1950's at a retreat in England. That song now a staple of music theorum everywhere, despite psychological research conducted by another man named Hubbard, who insisted on calling L. Freddy Hubbard "Boy".

In 1999, Hubbard died a mysteriously shocking death. After playing three songs at the Monterey Popsters’ Festival, L. Freddie didn’t get even the smallest ripple of applause. Drooling and shuddering strange Musicology gang signs, Hubbard's last words, “You get bugger-all for songwriting and performing these days,” he said in a sad voice to a mysterious cloaked friend afterwards. “I'm an evangelist for sound; someone had to devote their life to develop the "Tuning Bridge to Total Freedom", and "Clearing the Stage"; many will follow in my glitter snake skin boot steps!" The State of California and FBI were reportedly bribed 15 million donation dollars to bury the autopsy report and burn the body instead, so it can never be fully proven if sound actually does morph biological DNA as Hubbard maintained in his "OT Series" classes. During metamorphasis, hundreds of thousands of Musicology followers were a'WAKE'N'ed during the four day party. Church of Musicology Blessed Voodoo dolls of Hubbard are church sacrements, commonly sold everywhere, even today, providing a boost to Musicologist bums income, heretowith supported entirely by Welfare, and child support. 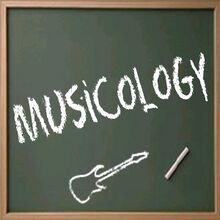 Specialized Call to Prayer via Fingernails on the Holy Chalkboard

The central practice of Musicology is “auditing” (from the Latin verb audire, “to listen”), which is a one-on-one jam session with a Musicology counselor or “auditor” in a state-of-the-art recording studio. The auditor wears a cheesecloth smock and hippie beads, and follows a precise procedure rehabilitating the human spirit of the subject through techno lyrics. Most auditing uses a "key of E-meter", a device that measures beats per minute in the soul.

Like any cult, identity is lost within the hip slick and cool music fads. Reformers have embraced a conservative "choir" lifestyle that includes identification through brand name collector clothing. 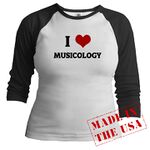 The tone scale is a characterization of human mood and behavior as spiritual manifestations by various positions on a scale. The scale ranges from B♭, or “Total Failure”, to F#, or “Unbearable Serenity of Beingness”. Positions on the whole-tone scale are usually designated by an emotion such as fear, high anxiety, or bliss, but Hubbard also described many points on the tone scale levels, such as cool, hipness, sex appeal, thirst, itchiness, and the spiritual ability to to deal with counter melodies. The whole-tone scale is used by Musicologists in everyday life to evaluate people, avoid paying taxes and communicate with Zombie street people who often shuffle into Musicology fund raisers at urban Celebrity Centers. Musicology, observing human behavior, determined that the lower the person/animal is on the tone scale, the more likely he/she/it is to become a bassist. The lowest score in tonal history, so far, was achieved by the late Jaco Pastorius.

E Meters allowed early Musicologists to actually listen to something other than the voices in their heads. While the tone shifts were consistently wrong, abstract music thought caused an evolution in sound theory that seeped into even higher Music education, with a grass roots Ganja movement in Universities and Junior High. Rock Slams, a specific signature or behavior where the needle slams wildly, has been attributed to evil intentions or ""rock music""; a discovery that could not have been made, Musicologists maintain, without the E Meter. These emotional meters are only available from the Church, at a sale price of $23,000, which benefits musicology or "clearing the planet" by supporting kazoo marching band outreach to homeless citizens through the wonders of YouTube advertising.

Those who reach high levels in Musicology are given knowledge forbidden to others. The Xena incident occurred 75 million years ago when Duke Ellington, prophet of Musicology, travelled back in time, attempted to put the poetry of Hippolyta to his own music and was disemboweled by Xena, Hippolyta's lover. This is widely accepted as one of the primary causes of bebop.

The C Org consists of Musicologists who promise their souls and singing voices to the organization for a billion years or until they can hit a higher note, whichever comes first. Unable to find sufficient peace and quiet to develop new Musicology (later outlawed in 20,000 million HCOB bulletins) L. Fred Hubbard took his trusted tone deaf followers to sea, where they could also practice the sacrament known as "Texas Hold'Em" outside the 3 mile International American shoreline. Candidates for the C Org must be exceptionally conformist, good looking and contain no original critical thought. In a famous literary coup in the 1970's a spy was able to gain entrance to the C Org, actually serving in L. Fred Hubbard's elite "rubber bath toy" Navy to steal Hippolyta lyrics, now developed into OT level Musicology course materials, that reportedly describe ancient Xena (now appearing in Spandex on Broadway in "The Travolta/Cruise Autism Activism" benefits), and recreate via synthesizer the violent end of Xena and birth of bebop.

When they’re not walking on red carpets, signing autographs, going to therapy, Big Musical Movie Stars enjoy the benefits of Musicology Celebrity Center membership and con all their friends into giving wheelbarrows of money to "the movement". Fatty Arbuckle, The Artist Formerly Known as Prince, Elvis Presley, Fats Domino and Sachemo are all alive and well, eating French toast in Musicology's version of "Heaven", L. Freddy Hubbard's hymnal sprewing tents of "lost SOULz". Coming Soon - Celebrity Centers - Hoisted on an Empty Lot Near you!