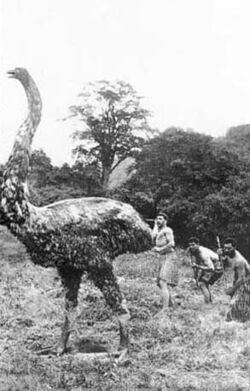 The natives get sick of the moa not contributing to society in any way. Shortly afterward, they were fried, and beaked through the head. The natives, that is.. See section on attack patterns

For those without comedic tastes, the self-proclaimed experts at Wikipedia have an article about Moa.

The Moas are large, flightless birds that are native to New Zealand. They are unique in having no wings, not even small wings, unlike other ratites. Their lack of wings is thought to be a curse from God because they are such evil and vile creatures. Moa are often silent and can seem quite innocent, even cute. However, once their target's attention is drawn to them they'll often attack, breathing fire from their mouths or crushing their aggressors between their deadly jaws. They will also attack when provoked, provocation including comments such as "look at that stupid Moa", "oh, it's just a Moa" or "Come get some Moa".

The Moa is also an annoying and very useless creature. It'll often go on about nothing that nobody likes to hear about and make no contribution to society. It is very opinionated and will not shut up if it is talking. This is often used in conversations with annoying people such as preppy cheerleader-type girls. "You're such a Moa." "Shut your mouth you stupid Moa." "Go away Moa." The Moa is often found in everyday life, even working in a job. It is often seen sponging off other people. Funnily enough, the moa will allow people to criticise or insult it (although it will not care) and not attack them if it is talking or doing work.

The Moa is why the indigenous population was held back technologically because they continuously show up whenever someone is doing something useful in order to tell "Moa jokes". If victims of moa jokes do not laugh politely or are even foolish enough to insult the moa, they are instantly attacked. Some examples of Moa jokes include:

Although moa attacks on humans are common, its diet is unknown. It is, however, believed to have acquired a taste for Maori flesh. For days it can seem they're just hiding behind a bush without eating or drinking, only to leap out and devour a passing Maori without warning. A moa's stomach has never been dissected because of all the scientists that try to catch a moa end up with a moa beak through their skull, which is knowledge popularised by the saying "That's about as fun as getting beaked through the head". 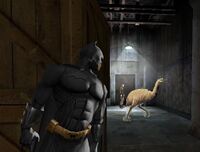 The moa's habitat is one where it can hide. This can mean underground, in buildings, behind moa statues or in the bush. You never know when a moa might show up, so you'd better be careful.

Look carefully into every room before entering!

Attack patterns of the Moa[edit]

These are the attack patterns of the moa.