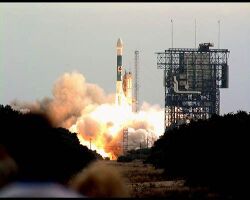 We'll be lucky to even get this thing off the ground... Well, maybe a little bit

“I just read the title as 'Mail Order Lobster'... perhaps I should leave, now.”

The Mars Climate Orbiter was an unsuccessful NASA mission to the planet Mars that was launched on December 11, 1998.

The Climate Orbiter was created to measure climate on the planet Mars, although every day is either sunny or dusty. These measurements would answer several pressing questions:

The fact that the above questions were so pressing accounts for the change from the original name of the project, the Mars Kryptonite Orbiter.

The launch of the rocket appeared to go well, although it accelerated a little faster than predicted, as though something were perhaps missing from the nose-cone. One NASA official did notice that the rocket was, in addition, significantly off course, but after talking to his wife, kept his mouth shut.

For those without comedic tastes, the self-proclaimed experts at Wikipedia have an article about Mars Climate Orbiter.

JPL engineers search for the mission payload at the fateful San José Mine in Chile.

After a nine-month cruise around the world on Royal Carribean, relaxed technicians at the Jet Propulsion Laboratory in Pasadena attempted to contact the spacecraft as it entered orbit around Mars, but were unable to receive a signal from the craft after numerous attempts.

JPL scientists panicked only briefly on seeing their meal-ticket wink out of existence, before hastily devising a brand-new meal-ticket: An exhaustive, detailed, and expensive investigation to determine the cause of the loss of the craft.

The investigation revealed that there was a disparity between the units being used by JPL and those being used by one of its contractors. In shipping the Climate Orbiter from its production facilities in Pasadena to the launch site in Florida, JPL thought its mailroom subcontractor, Mail-R-Us, was using a ZIP Code to properly identify the delivery location. In fact, Mail-R-Us used what it always used, and shipped the package to NASA's area code. NASA officials, unaware of this, went ahead with the launch using the zip code instead, and the resulting muck-up surprised everyone except that lone NASA official. And his wife.

The Climate Orbiter is expected to be found years from now, either in the Dead-Letter Room of one of the U.S. Post Offices or as a crumpled ball of metal near one of the poles of Mars.