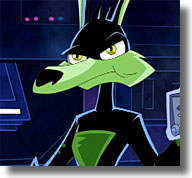 Loonatics Unleashed is an EXTREME!! animated cartoon based on the future EXTREME!! descendants of the Looney Toons characters who live in the year 2772 (see future). They live in a world where they are the among the very few real live Furries left on Earth, which is strangely renamed Acmetropolis. How Acme took over is unknown. Rumour has it there is also regular acne outbreaks, hence it's name. Acmetropolis is also a city-planet, whatever the fuck that is, and is prone to 'accidental' explosions, collisions, just accidents in general from intentional misuse of... everything.

It has been discovered that there are numerous Furrie-Haters attempting to kill the Loonatics, & for no reason, ruin Acmetropolis.

Among these people are(Note that it is still being studied on how they are alive excluding immortals such as Jesus(All variations.), God, Chuck Norris, etc.): Chuck Norris, Steve Balmer, Jesus, Goku, Pikachu, Tina Fey, a genius, a bodybuilder, a surfer, a wannabe weather-woman, a goth, some ice-obsessed alien vikings, & a bunch of others.

The show tells of how in the year 2772, these EXTREME!! descendants of the Looney Toons were hit by a giant EXTREME!! meteor that villain sent from outer space. Unfortunately the dumbass didn't realize it would have given them superpowers.

It also deals with their daily trials against society & villainous furry-haters, as The Loonatics are some of the very few real live furries. To prove that furries aren't evil, they save the city on a regular basis.Another struggle with some of the characters is dealing with being newly unleashed, as up to this point they have been leashed all their lives.

They were gathered and trained by a hot woman (Who Danger Duck is in love with) named Zadavia. She is the villain's sister, & gives The Loonatics assignments. 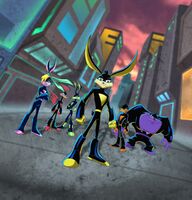 He is the leader of the Loonatics, he has the ability to shoot EYEBEAMS!. Also Lexi's close cousin. A bossy bunny who doesn't know what is going on.

He has the ability to throw away his balls that explode, turn into stuff (Boulder, orange juice, fire, tar, etc.). He can also teleport. A greedy coward, the writers make bad stuff happen to him, because they are jackasses. If it wasn't for this, he could kick everyone else's asses. Danger used to be a pimp before the writers started abusing him & made him a pool cleaner. Despite his past pimping, the only women he can't get are Zadavia & Lexi. He also once acted in an R-rated movie with Pamela Anderson and Lola Bunny.

She has the superpower of being able to shoot more LAZAHS, except these ones are pink, like her signature colour. She is popular among furries, & is apparently the hottie of the show. Explained by her signature colour, pink, she is obviously a femininst and a lesbian. With martial arts training, she could be the most powerful member of the team. Due to her constant whoring herself out, she has earned the nickname "Sexy Lexi".

Slam, being the result of a genetic test, was to be the Loonatics angry pet. But since I could dress himself, the Loonatics decided that Slam could have a place in the team.

Slam often talks, but nobody ever understand what is saying. And therefore defining it to be meaningless nonsense. But if you listen very close, you can hear that it’s in fact Scottish.

He can spin around. Likes to Beyblade, use Duel Disks, watch MeatSpin, & other spinny things. Very strong, but dumb. A perfect stereotype. Like his ancestor(s), he has a speech impediment or is just plain retarded. Also a retired wrestler, & ISN'T fake. He is quite impartial to lazy susans and sushi trains, or as they are known in the future sushi flying chrome miniature space time travelling portals.

Tech is probably the least EXTREME member of the Loonatics, but the MOST wanted by fangirls. The coyote is much of the "Jimmy Neutron" in the team, spending his time cleaning up pizza boxes and fixing science-stuff for the rest. He dreams if the day he can leave the Loonatics and discover the cure for AIDS. But of course he doesn’t have the money, because Duck's a greedy whore.

While young, his dad never really spend any time with him, too busy hunting after some roadrunner. His mom hated him for being a weak pussy she used to beat him up. The coyote got a hard time in school being picked and bulled by all students and teachers. Although, nerd as he was, he finished school with good grades.

18 years old, after writing his own biography "The Way I Are” Tech was hired by a crew of inspired and aroused scientists offering to give him a well-paid and "interesting" job, designing super robots for a future Slowsky super-army. Unfortunately, he never got the chance to get started since he got hit by a very EXTREME meteor, giving him superpowers and forcing him to join up with the rest of the Loonatic-team.

Tech has got one archenemy. Dick Cheney. We don’t know why but Tech got his reasons. Anyway, Tech tried to kill Dick with a very powerful laser beam. But Dick's dark powers where already too strong and he menage to absorb the laser beam with his bald and shiny forehead, that only making him MORE powerful and evil! 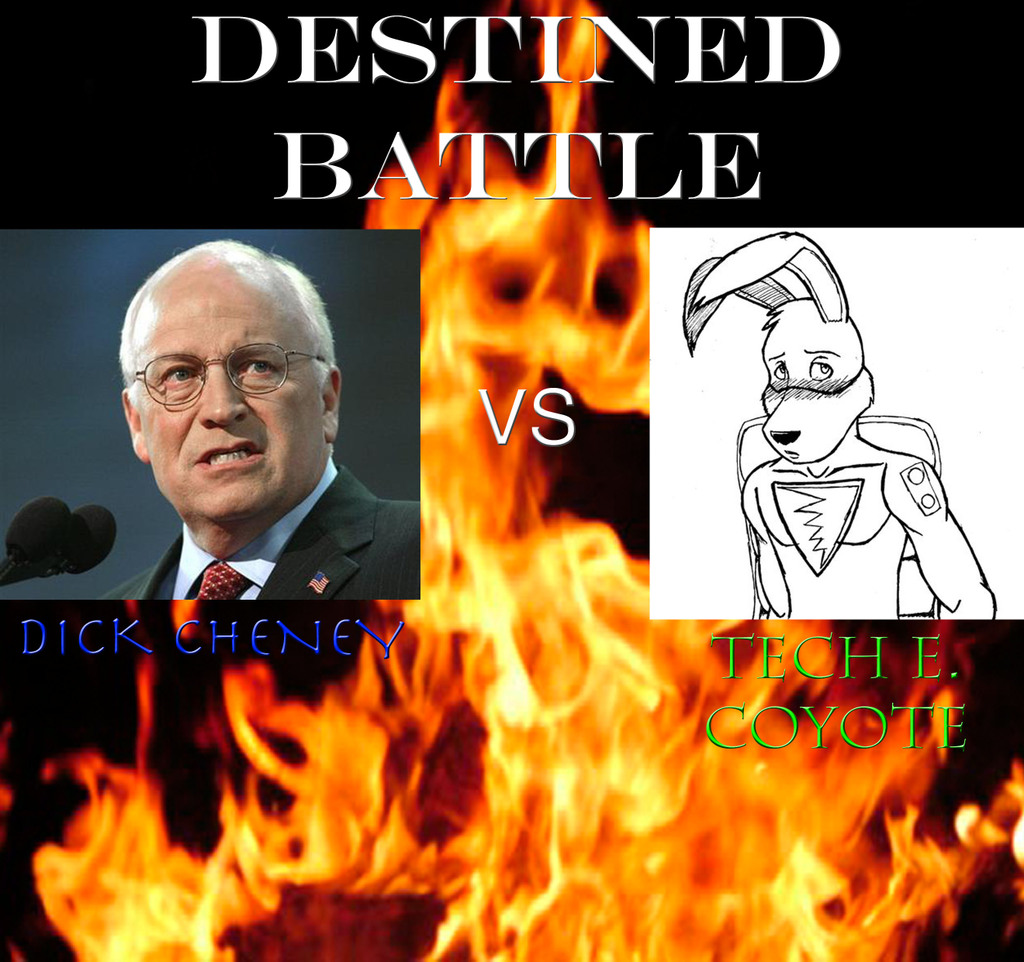 Tech often plays poker with Bill Nye, His best friend Chuck Norris, Albert Einstein, his girlfriend Rena Ryuuga & other geniuses, despite being smarter than all of them.

Being the most EXTREME and annoying Loonatic ever, Rev Runner (say three times) can run up to OVER 9000 mph! (That’s faster than you.) He’s ability to run fast is actually the result of the hazardous long-lived leg-spasm, not the large amounts serious amounts of caffeine and sugar he ate daily as the scientists first thought.

Rev speaks and moves fast too. Making him the perfect validate for many different jobs. This is a list of working titles is gone under before being a lunatic/superhero.

• Annoying rapper, only to be rivaled by a gang of chipmunks.

Some folks says that he is even fast enough to run on water! But they could be lying. Which we don’t know, since it could be true. Rev also hates potato salad. More than anything else.

Rev is also the fastest fucker in the world. Unfortunately for him this makes his orgasms fast too. He is not the worst of all, as the Flash is a quick-shot.

After the first few episodes, everyone realized that there weren't enough. Eventually those lazy bastards, the writers, made some new episodes.

This caused lawsuits from various Super-Heroes, Heroes, etc. like the X-Men, Batman , Power Rangers, The Fantastic 4, Teen Titans and the Teenage Mutant Ninja Turtles. After the lawsuits, the Loonatics turned out fine, & continued doing their things.

It was amazing to see famous, but stupid individuals like Wolverine testify in court. Unfortunately, everyone except the Loonatics lost.

Thankfully the Loonatics are safe & the retarded nine-year old with a bad sense of humour has been put in jail. On another note, Slam is addicted to crack, & Rev to Prozak.

It also seems a mysterious man known only as Malak1147, decided to bring the world down to hell by cross breeding anime with cartoon with video game. The abomination that was created by him can be seen below: