“Actually, god came when I died....he wanted my ass so bad”

~ Oscar Wilde on Fred Phelps being wrong about when god laughs

Landover Baptist Church is the only true Christian church on Earth. It was supposedly founded by God Himself in order to oppose the multitude of false churches and evil doctrines which currently masquerade as modern Christianity. Landoverians often say these false churches put the demon in denomination while Landover, on the other hand, puts the fun in fundamentalist. THEY ARE AMAZING. 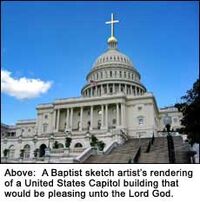 Landover Baptists believe that the USA is a Christian nation and should be ruled by Biblical laws. In this they agree with mainstream Christians like Mike Huckabee, Jim Hagee, and the late Jerry Falwell.

Landoverians proclaim that the Bible is the literal and infallible word of God. But which Bible? Is God's Word to be found in the Good News Bible or in the Ebonics Bible...or the Modern Word for Loving Hippies or the Hip-Hop Bling-Bling Smackdown Bible?

Landover Baptists avoid all these smarmy modern "transliterations" and believe that the King James Bible is the only correct, divinely-inspired transcription of God's word.

All their core beliefs come straight from the King James Bible.

Landover Bapstists hold that only the true followers of Christ get to go to Heaven, and everyone else goes to Hell.

Landovarians honor the Biblical adage to avoid unbelievers ("Be ye not unequally yoked together with unbelievers: for what fellowship hath righteousness with unrighteousness? and what communion hath light with darkness?" 2 Corinthians 6:14). To that end Pastor Deacon Fred prohibits unbelievers from entering Landover's church or trespassing on its immense, well-kept, and verdant campus.

Landoverians believe that God explicitly gives Christians dominion over the Earth, as laid forth in the Bible

The Bible recognizes slavery as legitimate and lawful. The Bible prescribes the death penalty for certain sinful practices like filial disobedience, working on the Sabbath, and promoting other religions. Landoverians take these Biblical teachings seriously. 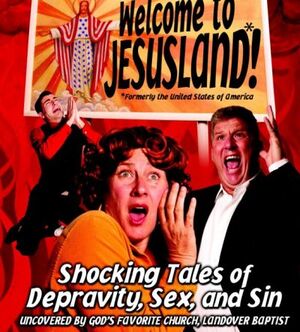 The cover of Jesusland, a theological exposé written by the pastors of Landover Baptist.

"I accepted Landover's call to join Christ about six years ago. Since then I have been disturbed by many false and even satanic allegations about the Landover ministry."

"Some claim that Landover Baptist is a vicious parody of Christian fundamentalism. Some say it is meant to mock and deride Christianity by making it seem absolutist, dominating, ignorant, and laden with bigotry."

"And just as clearly, the Bible does say that Christians are commanded to rule the Earth. That's just plain fact! You can look it up in any Bible you want. Read the Book of Revelation. If people think that's an unacceptably power-hungry dominionist teaching then they had best take the matter up with God and not Landover Baptists. Landoverians didn't write the Bible. God did."

"The Bible also commands God's people to kill male homosexuals, disobedient sons, and anyone who proselytizes for a false religion. Again, this is non-negotiable: these are God's commands, written in His Book. Among modern Christian churches only Landover Baptists take this seriously. Everyone else just throws God the finger and ignores His rules."

"The Bible lays out the rules for righteous Godly slavery in Exodus, Deuteronomy, Leviticus, and Numbers. Christ never said one word about abolishing slavery. Righteous slavery is as Biblical as baptism. My good friend, the late Reverend David Chilton of the Church of the Redeemer, wrote:"

"'The Bible permits slavery. This statement will come as a shock to most people. The laws in the Bible concerning slavery have very seldom been studied, much less preached upon. But the biblical laws concerning slavery are among the most beneficent in all the Bible.'"

"This particular belief is repudiated by other Christian churches...but the facts are in the Bible. Slavery is part of God's law. Landovarians say that Christians can either follow God's law or go to Hell. As Pastor Deacon Fred might say, It's just that simple, sinner!"

"Now, I know that certain modern-variety Christians take exception to Landover's straightforward Biblical approach. One such fellow wrote that "[Landover's website] is a religious/racism". We might translate this horribly ungrammatical complaint into English as follows:" 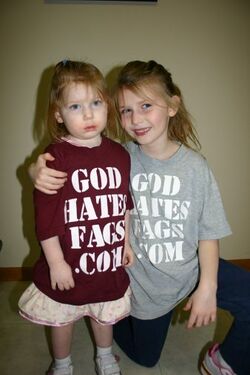 As written in Leviticus, gays are abominations before God. This is one of the Christian Biblical beliefs that Landoverians hold dear.

"Of course Landover is a parody. Christianity is a religion of brotherly love, forgiveness, and mercy. The Bible, while admittedly one source of Christian doctrine, is also an archaic and wide-ranging work. It contains much that was written for bygone ages, much that is allegorical, and much that is now understood to be inappropriate."

"The writings on slavery, for instance, applied to Bronze Age cultures and cannot be taken seriously today. I don't care what David Chilton wrote. The prophecies in the Book of Revelation are metaphorical, not literal -- Christians are not called to take up their swords and conquer the world, no matter what George Bush believes."

"It's OK to believe in alternate paths to God."

"It's OK to chant Hare Krishna if that strengthens your spirituality."

"It's OK to for men to sleep with other men if they really love them!"

"I say, You can just ignore all that old-fashioned stuff in the Bible."

"As for Landover Baptist, it is a parody and the purpose of parody is to deride and mock. Parody never really makes the reader honestly question belief systems. Don't think for one minute that it has any purpose other than pure evil."

"All right, as a practicing Christian I have to admit that Christians are right and everyone else is wrong."

"And so everyone else is going to Hell."

"That's just the simple, universal truth. I don't think it's something that needs to be mocked and derided by those assholes over on the Landover Baptist website. Who are they to judge me just because I like to wear pink frilly panties?"

"God loves all, else all would not have been created. I couldn't believe it if God didn't love lets say..those who play soccer, those who are poor, and those living in 3rd world countries as these extremists seem to believe. I mean, He wouldn't have created unrepentant sinners so He could burn them in Hell forever ("And whosoever was not found written in the book of life was cast into the lake of fire") unless He loved burning them, right?"